Seasonal but unsettled conditions push into Sask. for the weekend 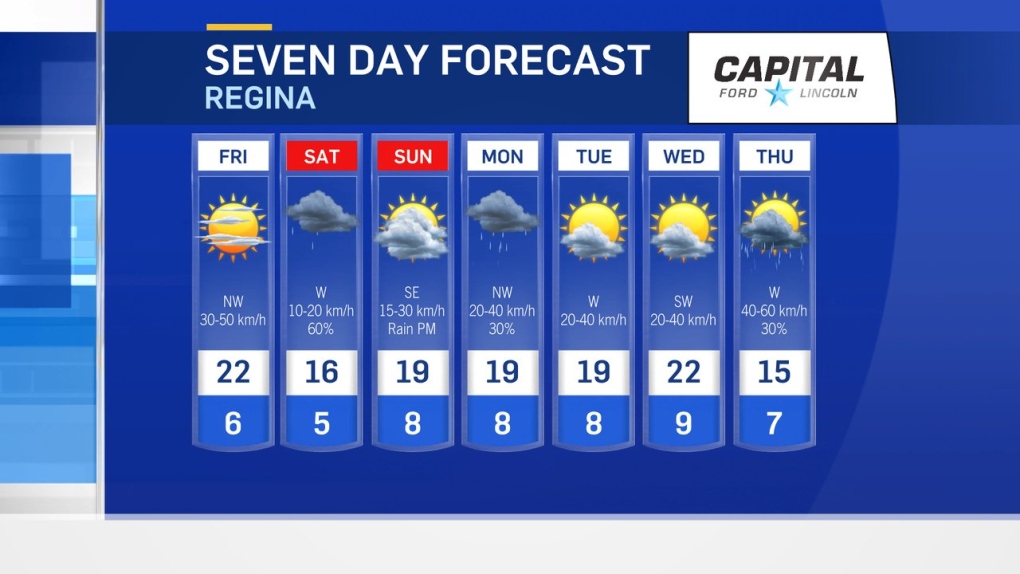 September has spoiled us so far with mainly sunny conditions, above seasonal temperatures and, well there is no better way to say it – just generally beautiful conditions. Our CTV Skycam shots in the evening have been extremely swoon-worthy.

Even with the crisp mornings, the days have settled, the sun has come out and the last couple of days have definitely been giving us serious summer vibes, even though the leaves are starting to change colour.

Now, as September hit many people start to think about fall weather. I am torn this week between wishing the heat would stick around and looking forward to the crisp fall air that brings in the beauty of changing seasons. But, I’ve heard from many people that they are ready for fall temperatures.

And if you’re one of those people – I’m glad to inform you that more seasonal conditions are falling in.

First of all, the high-pressure ridge in the upper atmosphere that brought warm air into the province over the last couple of days – to the tune of 10 degrees plus above seasonal – will move east and be replaced by more seasonal temperatures and winds from the north and west.

As for weather systems, the low we are watching today moved from northern Alberta through northern Saskatchewan and continues towards Hudson Bay, right around the 60th parallel and the border with the NWT. Attached to the low is, of course, a cold front which is the main driver behind our shift in temperatures. This low is also bringing moderate rainfall to northern and central Saskatchewan through the morning before it skirts east this afternoon.

After this, things don’t clear up for long. A shortwave will move through central Saskatchewan through the morning as well, which looks to mainly impact North Battleford, Kindersley, Saskatoon and Yorkton with a few showers, but there is the small chance of a brief pop up shower here in Regina as well.

Then, more organized, unsettled conditions build into southern Saskatchewan on Saturday as an extended trough of low pressure moves through that is likely to bring the heaviest rainfall to the southwest corner of the province. But scattered showers are expected through most of southern Saskatchewan.

So, some rain, cloud cover and sweater weather are on the way for those of you itching for fall to be here.

I'm ready for cooler weather and the arrival for fall (at least for a couple of weeks before I'll wish it was summer again), anyone else? #SaskWX @CTVRegina pic.twitter.com/s8LCMxaWDY

Frustrated onlookers urged police officers to charge into the Texas elementary school where a gunman's rampage killed 19 children and two teachers, witnesses said Wednesday, as investigators worked to track the massacre that lasted upwards of 40 minutes and ended when the 18-year-old shooter was killed by a U.S. Border Patrol team.

Texas school shooting: What we know so far about the victims

Families are sharing photos and stories of their loved ones, who lost their lives in a mass shooting in Texas that killed at least 19 children and two adults on Tuesday afternoon.

Charest and Brown challenge Poilievre, and other notable moments from the French Conservative leadership debate

As it happened: The 2022 French-language Conservative leadership debate

The Conservative Party of Canada leadership hopefuls debated face-to-face in French, in Laval, Que. on May 25. Recap CTV News reporters' real-time updates as the debate unfolded.

Several parts of the country, including British Columbia and Canada's Maritime provinces, are likely to see wetter-than-normal conditions this summer, according to AccuWeather's annual summer forecast.

The Public Health Agency of Canada says it has now confirmed a total of 16 cases of monkeypox in the country, all in Quebec.

Canadian meets her long-lost sister for the first time on U.S. morning show

During an appearance on ABC's Good Morning America on Wednesday, adopted siblings Hannah Raleigh of Chicago and Limia Ravart of Montreal met in person for the first time after an ancestry test confirmed the two are in fact related.

Prime Minister Justin Trudeau cancelled plans to appear in person at a Liberal fundraiser in British Columbia Tuesday after RCMP warned an aggressive protest outside the event could escalate if he arrived, said a source close to the decision. The source spoke to The Canadian Press on condition of anonymity because they were not authorized to discuss the situation publicly.

'How to Murder Your Husband' author found guilty of murder

A jury in Portland has convicted a self-published romance novelist - who once wrote an essay titled 'How to Murder Your Husband' - of fatally shooting her husband four years ago.