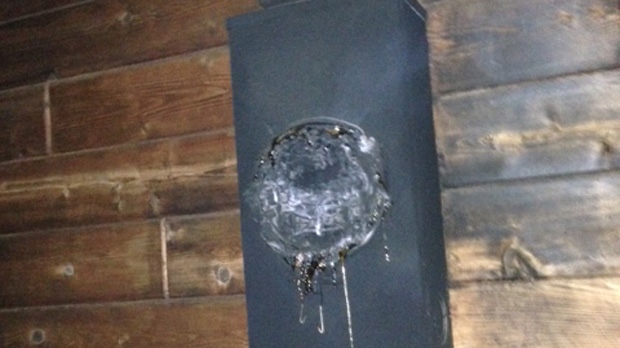 A smart meter that caught fire at a house in east Regina on Friday is seen in this photo taken by homeowner Joan Riemer.

SaskPower is investigating yet another fire involving a smart meter, this time at a home in east Regina.

The latest incident happened at a house in the 2400 block of Swayze Crescent early Friday morning.

Homeowner Joan Riemer said she was woken by the sound of loud bangs coming from the back wall of the house around 1:30 a.m.

“I thought it was somebody hitting it with a bat,” Riemer said. “I looked out my bedroom and I saw flames, and then I knew what happened.”

Riemer says she went outside and found that the smart meter had melted and the cover on a nearby barbecue was on fire. She pulled the burning barbecue away from the home and called 911.

No one was injured and the fire caused minor scorching to the cedar siding of the house.

Riemer was the only one in the home at the time, and she says it’s lucky she was there to call for help.

SaskPower replaced the melted meter with a traditional unit and restored power to the home about an hour later.

Spokesperson Tyler Hopson said it's concerning whenever there is a malfunction, and the company is working to remove smart meters as quickly as possible.

Earlier this year, the province ordered SaskPower to remove the more than 100,000 smart meters that had already been installed, following at least eight fires linked to the devices.

"It does look similar to the other eight incidents that have taken place this year," Hopson said.

He says SaskPower is planning to have all meters removed by March 15.

"We're trending a little bit ahead of schedule right now in terms of the removal," Hopson said. "We're working to make the situation right and get a fresh start on smart meters."

Saskatchewan's Crown Investment Corp. was directed to do a review after the fires. The investigation results found that rain water and contaminants getting into the meters appeared to contribute to them failing.

The report said that customer safety wasn't enough of a priority.

"In various parts of the province, eight meters failed catastrophically, melting or burning and in some cases damaging the sides of houses," the report said. The failures were not related to "hot sockets" or installation issues, it said.

The report also said SaskPower failed to look at the possibility that the meters could short out and catch fire.

It said that the utility looked at 359 returns and found that 18 smart meters were burned and no longer operational. Three more had high temperature errors, while 107 had display problems and 67 showed error codes.

The Opposition has been criticizing the government for its response to the safety issues and is calling for the resignation of Economy Minister Bill Boyd, who is also the minister responsible for SaskPower.

The CEO and president of SaskPower, Robert Watson, resigned in wake of the issue. Boyd said Watson has taken responsibility for the project's shortfalls.

Hopson said SaskPower customers can request a priority exchange if they are concerned about their smart meters.

Friday’s incident isn’t the first time a power meter has caught fire at Riemer’s house. About two years ago, a traditional meter caught fire after the cables shorted out due to a ground shift.

“To happen twice is quite something,” Riemer said. “I hope I don’t have problems with this one because two is enough.”