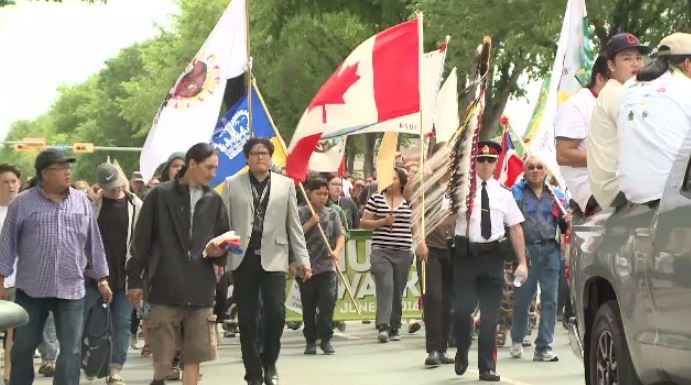 In 2008, MacLean’s magazine named North Central the worst neighbourhood in Canada. But, organizers of an annual walk want to change that.

More than 1,000 people gathered Thursday morning for the community’s annual Smudge Walk. Myke Agecoutay, Chief of Muscowpetung First Nation, launched the walk back in 2008 in response to MacLean’s ranking.

"It's important for people to bring awareness with what's going on in the community and to stop the stigma, because it's a really a community full of love, children, elders," Agecoutay said.

Organizers want to use smudging to help the community heal.

“We want to apply that concept to smudging north central, to purify and cleanse the community," said Agecoutay.

Jan Morier moved to North Central in the 1980’s. After moving away for several years, she has returned and wants to help make things better.

“I had a choice at that time whether to hide and cocoon myself, or to get involved,” Morier said. “I haven’t looked back and it’s been the most joyous community to be involved with.”

For the police who staff the streets, the walk gives them a chance to build relationships with the community they work to protect.

"It's an opportunity to for us to interact with the residents in a way that's not necessarily business for us,” said Superintendent Corey Zaharuk of the Regina Police Service.

For Morier, along with all of North Central, the walk is a chance to bring positivity back to the neighbourhood and give the residents a chance to heal.

"Despite some of the things that the rest of the city might think about North Central, we're just fighting all the way back. That's not who we are, that's not how we are."