'This small town has a big heart': Ukrainian refugees settle in rural Sask.

'This small town has a big heart': Ukrainian refugees settle in rural Sask.

Multiple Ukrainian families have found refuge in rural Saskatchewan with help from a town northeast of Regina.

The community of Lemberg, Sask. has a population of about 300 people, but that number is growing. Now it’s home to four Ukrainian families, with four more on the way.

“I love Lemberg,” Tetiana Levchenko, a refugee from Ukraine said.

“I feel comfortable and safe, we are happy here.”

When the war against Russia and Ukraine started, Levchenko and her husband Yurii Boiko embarked on a three-month journey to Canada.

“It was my dream to come to Canada,” Boiko said.

They made stops in Poland, Czechia, Germany and two other Canadian provinces before arriving in Lemberg in July.

“Very tiring for us, but very safe,” Levchenko said.

The Lemberg Community Refugee Fund aids Ukrainian families who are willing to try the rural lifestyle.

Kerry Maurer is one of seven members on the committee.

“We felt that coming from Ukraine with a suitcase was not going to be easy to start a life in Canada,” he said.

He said the fund supports the family for the first three months, providing accommodations, food, furniture and $1,000 per family.

He said the committee ensures refugees have a place to live, a job, a vehicle and help with the overwhelming amount of paperwork.

“Social insurance, health cards, and whatever other services the rest of us have taken for granted, doing one thing at a time, through our lifetime. Well now they have to do it all at once,” he said.

Committee member Rebecca Maurer is helping the newcomers with the language barrier by teaching an English class once a week.

“We do all aspects of language arts,” she said.

“It’s been very beneficial and I’m just amazed how quickly our families have learned English,” she added.

Rebecca said she is a retired teacher who always had one rule, “treat others how you would like to be treated”.

“That’s kind of how I got involved here,” she said.

“If this happened to me, as a Canadian, I hope somebody would reach out to me.”

“I thought, we can help these newcomers into Canada, to welcome them and make them feel at home and that is exactly how I would like to be treated.”

Levchenko said she is thankful for the hospitality.

“A small town, but this small town has a big heart,” she said.

Levchenko works for a local market garden and opened her own nail salon with help from the refugee fund.

Boiko is a welder at Pattinson Liquid Systems. There, he works with Yuliia and Vitalii Maliuchenko, another Ukrainian family who came to Lemberg in June.

The Maliuchenkos said they’ve adjusted well, and recently invested in a rent-to-own home.

Lemberg gives them, “Hope for a new and happy life,” Yuliia said.

However, she is still worried for her parents who live close to the Russian border, they stayed in Ukraine to care for her grandmother.

The Maliuchenkos have two sons, one attends the local high school, while the other plans to settle in Lemberg with his girlfriend, and her parents, on Nov. 20. 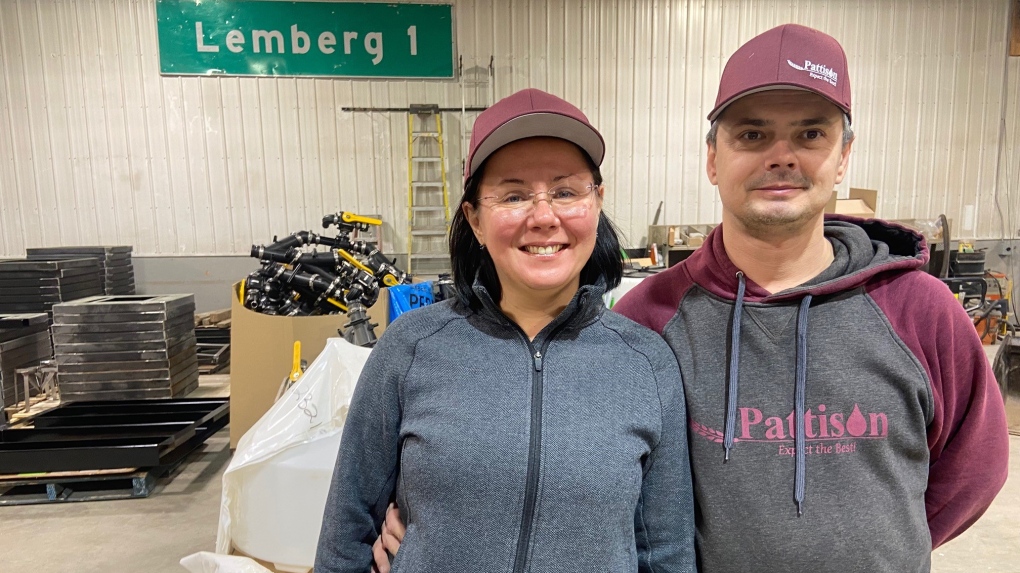 Rebecca said, in turn, the Ukrainian families are helping Lemberg since it was in need of workers. She said the refugee fund is working towards bringing more families to the community.

“If they do want to donate, they can just send a cheque to the Lemberg Community Refugee Fund.”