REGINA -- Saskatchewan has three new cases of COVID-19 bringing the total to 304, with 95 cases considered active, the province announced on Tuesday.

Eighteen more people have recovered from the virus, bringing the provincial total to 205. The state of emergency has also been extended for another two weeks. 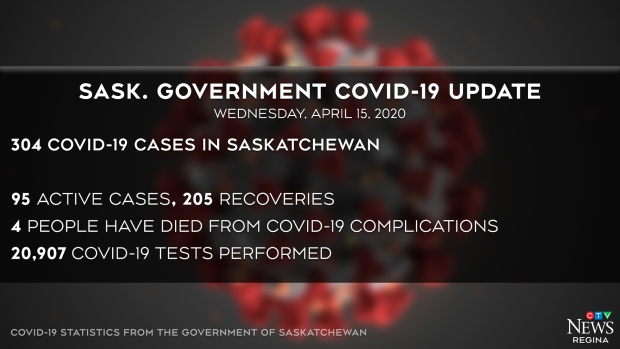 There are eight people receiving inpatient care. Of the total cases in the province, 147 are located in Saskatoon, 67 in Regina, 58 in the north, 15 in the south, 10 in the central region and seven in the far north.

After saying that the province will look at relaxing some restrictions, Premier Scott Moe specified that other restrictions will not be relaxed in the near future.

“We will continue to recommend against any unnecessary travel,” Moe said during Wednesday’s COVID-19 update.

He said restrictions on large gatherings and visit to care homes will also remain in place for the foreseeable future.

He explained that large events are still of a high risk, and any discussion about lifting those restrictions would be premature.

131 cases are considered travel related, 122 are a result of community contact, 30 cases are not associated with a known exposure and 21 are still under investigation.

A total of 34 cases have been confirmed in healthcare employees.

Of the 304 cases, 53 per cent of cases are men and 47 per cent are women. There have been four deaths in the province. To date, Saskatchewan has conducted 20,907 tests.

Four people have died in Saskatchewan from the virus.