Orange markers have been donated by Pasqua First Nation to the Regina Indian Industrial School (RIIS) Commemorative Association to identify the graves located in the cemetery.

Members of the nation, as well as dignitaries including Mayor Sandra Masters and Lieutenant Governor Russ Merasty, were in attendance for the announcement on Sunday afternoon.

The RIIS Heritage Site is located two kilometres away from the location of the former residential school, a distance Pasqua First Nation Chief Matthew Peigan said was necessary to hide what he calls an “atrocity.”

Pasqua First Nation and Pro Metal Industries donated the 38 grave markers to create a permanent memory of the children who didn’t come home.

The permanent aluminum feather-shaped markers will be placed in the cemetery. 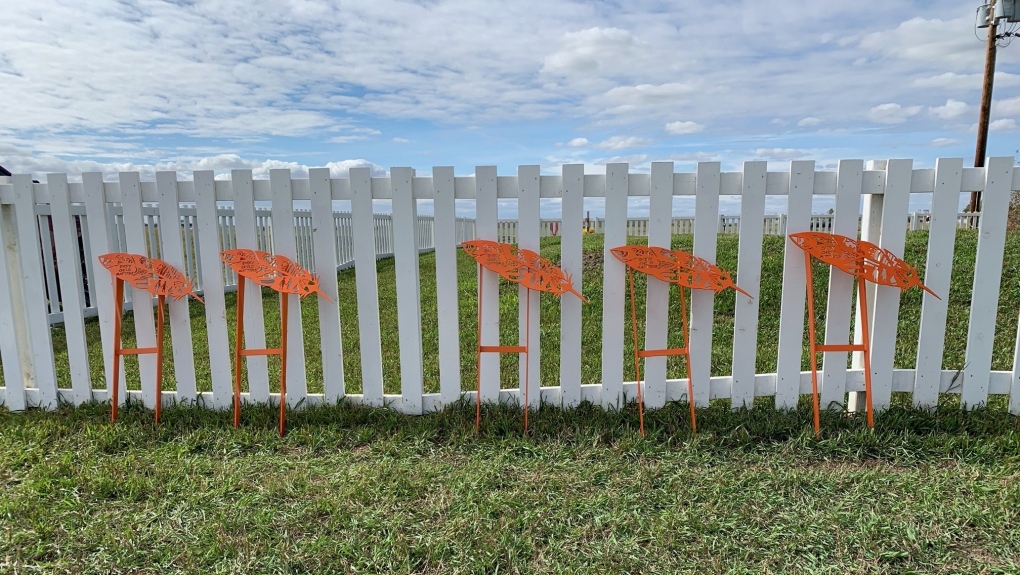 An example of the orange aluminum markers to be placed at each of the 38 children buried at the RIIS Heritage Site. (Kaylyn Whibbs/CTV News)

"We want to help remember and in placing these grave markers I believe for decades we will continue to remember,” said Chief Peigan.

Chief Peigan said a similar offer will be made to other First Nations with unmarked graves, such as Cowessess First Nation and Muskowekwan First Nation.

He said people are visual, meaning we need to see it to believe it.

"When we see something, then we know that it's real. When we see that happening here we know it's real," said Scribe of the markers and being able to see the distance between the graves and the site of the former school.

Two searches have been carried out at the site since its discovery in 2011. First in 2012, when 32 anomalies were found, then again in 2014 when six more were located.

Sarah Longman, chair of the RIIS Commemorative Association, said the search at the historical site will continue with the guidance of elders and survivors.

The 38 markers were not put up at the site on Sunday, but the commemorative association said the bright orange markers will be in place for the Sept. 30 holiday for truth and reconciliation.