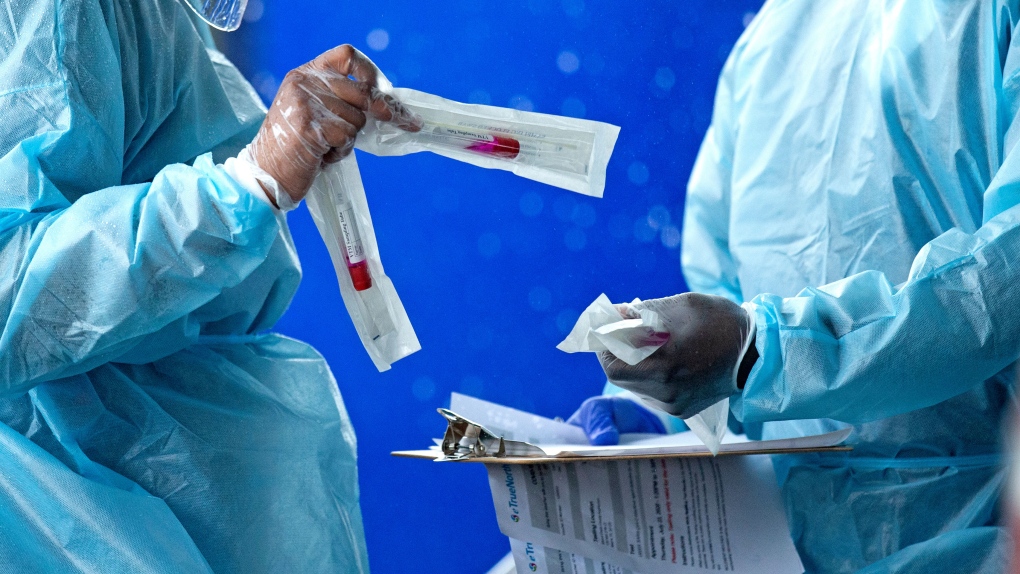 FILE - In this July 23, 2020, file photo, health care workers prepare a COVID-19 test sample before a person self-administered a test at the COVID-19 drive-thru testing center at Miami-Dade County Auditorium in Miami as the novel coronavirus pandemic continues. As coronavirus cases surge in hard-hit Florida, so do the turnaround times for test results. (David Santiago/Miami Herald via AP)

REGINA -- One more Saskatchewan resident has died after testing positive for COVID-19, bringing the province’s death total to 155.

The government said the person from the Saskatoon zone was over the age of 80.

The province also reported 190 new cases of COVID-19 on Thursday, along with 439 more recovered cases.

The Government of Saskatchewan said it will not be providing a COVID-19 case update on Jan. 1. Case information from Jan. 1 will be included in the Jan 2. case update.

Another 11 cases are pending residence information. Fifteen previously reported cases have been assigned, including two in the northwest zone and 13 in the north central zone.

A total of 142 people are in hospital in Saskatchewan related to the virus, including 112 people in inpatient care and another 30 in intensive care.

As of Dec. 30, the province said 3,458 doses of the Pfizer vaccine have been administered to health care workers in Regina and Saskatoon.

On Wednesday, 2,198 COVID-19 tests were processed in the province.

There are 57 active cases of COVID-19 at the Regina Correctional Centre, as of Dec. 31, according to the Government of Saskatchewan.

Testing is underway at the facility and the government said it expects an increase in case numbers.