Of those new cases, 15 — including 12 in the La Loche area — are in the far north and the other four are in the north.

There are a total of 531 cases in Saskatchewan and 196 are considered active.

So far, 329 people have recovered from the virus. 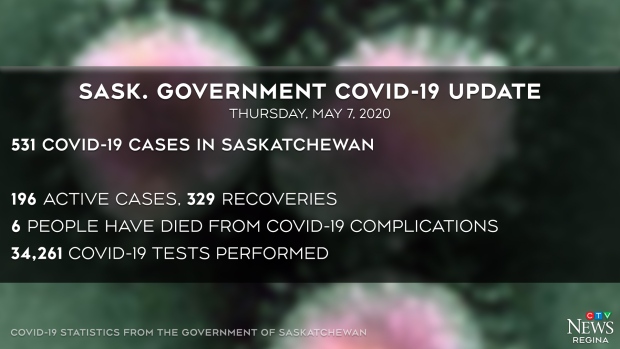 There are 12 people in hospital as of Thursday. Eight are receiving inpatient care and four are in the ICU.

Far north has most active cases 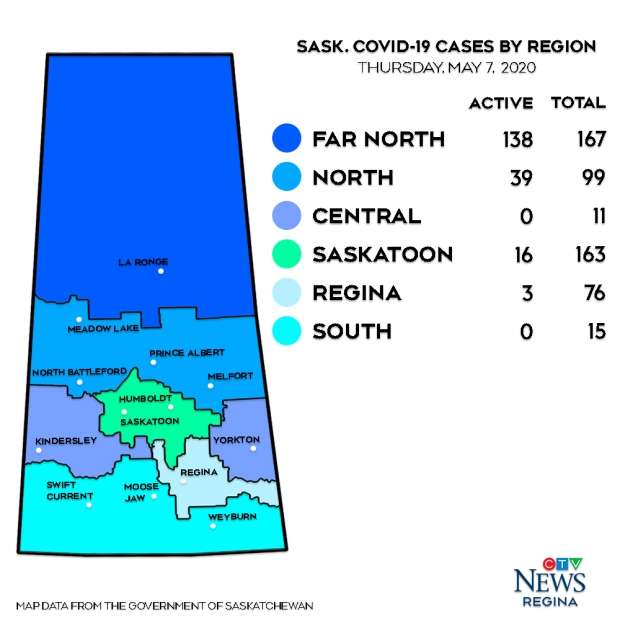 Cases remain low outside of the north

At the beginning of the pandemic, the initial upswing in cases was mostly attributed to travel and outbreaks at mass gatherings. More recently, the province has seen some jumps in total and active case numbers, but those can mostly be attributed to current outbreak situations in communities in the north.

“This just highlights that things have continued to be quiet in most of Saskatchewan,” said Dr Saqib Shahab, the province’s Chief Medical Health Officer.

Case number remain low throughout the rest of Saskatchewan, most notably in the south region that currently has zero active cases.

“Our hope is it is because of hardly any COVID-19 virus [in these regions],” said Shahab.

In these regions with low cases numbers, Dr. Shahab still encourages anyone that develops symptoms to go get tested.

In an attempt to curb outbreak situations in the province, some Saskatchewan health-care workers have been reassigned to head north to assist in the fight against the virus.

Health officials assured that these workers should not pose a risk to their home communities, when they return from working in the north.

“As long as appropriate [personal protective equipment], you’re not considered exposed,” said Shahab. “All health-care workers are now undergoing self monitoring, so twice a day symptom reviews and temperature checks.”

Scott Livingstone, the CEO of the SHA, said there is no need for any restrictions for health-care staff returning home as long as the status of patients is known and the proper equipment is being used.

Lloydminster to reopen on May 11

The province says Lloydminster will start to reopen its economy on May 11.

It was delayed in the city because of an outbreak at the hospital which is now “stable,” the province said in a news release.

Businesses that opened in the rest of the province earlier this week under phase one of the Re-open Saskatchewan plan can open their doors in Lloydminster on Monday.

Of the 531 cases in Saskatchewan, 139 are from travel, 231 from community contacts, 58 with no known exposure and 108 under investigation.

The cases are half men and half women.

There have been six deaths related to COVID-19 in Saskatchewan.

Last month, the province said people could form virtual households with one or two other household groups as long as they stay consistent.

The province says groups can be no larger than 10 people.

Two metres of physical distancing doesn’t need to be maintained in the groups unless someone has chronic health conditions. People shouldn’t join extended households with anyone who is at a higher risk of contracting the virus.

In a release, the province also reminded people that people who are considered high-risk for contracting COVID-19 should be cautious when taking part in activities as restrictions start to relax in Saskatchewan.

Health officials say people should also know who they’ve been in contact with in the past two weeks for contact tracing purposes.