REGINA -- Two more people have died from COVID-19 complications, according to the Government of Saskatchewan.

The two people, one in their 80s and the other in their 60s, are both from the far north region.

These are the ninth and 10th COVID-19 related deaths recorded in Saskatchewan.

“Our deepest condolences to the family and friends of the two people who have recently passed away,” Dr. Saqib Shahab said in the province’s daily update on Wednesday.

One of the deaths includes the one reported as under investigation on Tuesday.

Sadly, there have also been 3 deaths from #COVID19SK over the past 2 days - a sobering reminder that this is a dangerous virus.

Our deepest condolences go to the family and friends of these 3 individuals at the difficult time.

The person in their 60s has been identified to CTV News as Nelda Maurice by her family. The 64-year-old died Monday, weeks after testing positive for COVID-19.

The province also announced three new COVID-19 cases in Saskatchewan on Wednesday. Two cases are in Regina and one is in the far north. There are now a total of 637 cases in the province. Of those cases, 68 are considered active. 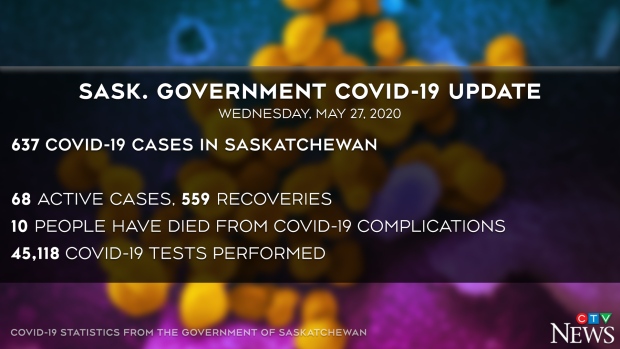 “This is a reminder to all of us as we engage in safely in the reopening of Saskatchewan, it is still all around throughout Saskatchewan and we need keep taking all the precautions,” Shahab said.

The province also announced 10 new recoveries on Wednesday, for a provincial total of 559.

There are currently four people in hospital, including three in the ICU in Saskatoon. One person is receiving inpatient care in Regina.

Shahab said the Saskatchewan Health Authority has declared a community outbreak in Saskatoon from two private gatherings that exceeded the 10-person limit.

He said the situation is “contained” since they were closed events. One person has tested positive and another is considered presumptive positive. Others are self-isolating after the events.

Shahab said health officials believe they were outdoor family events where people were sharing food, which he said has proven to be high-risk for transmission at large gatherings throughout the province in the past.

Shahab said food itself is safe and there haven’t been any cases of people contracting the virus from takeout food from restaurants.

However when people are sharing food, he said it likely won’t be possible to maintain physical distancing.

As the weather continues to improve in Saskatchewan, the province says public and private gatherings still have a maximum of 10 people under the public health order currently in place.

“We cannot go back to business as usual,” Shahab said. “We still need to minimize transmission where we can.”

People should always be aware of who they’ve been in contact with for the past two weeks, since those people will need to be contacted by public health if you test positive for COVID-19.

The government said Wednesday the provincial state of emergency has been extended for another two weeks.

It was originally declared by Premier Scott Moe on March 18 and has been extended every two weeks since then. 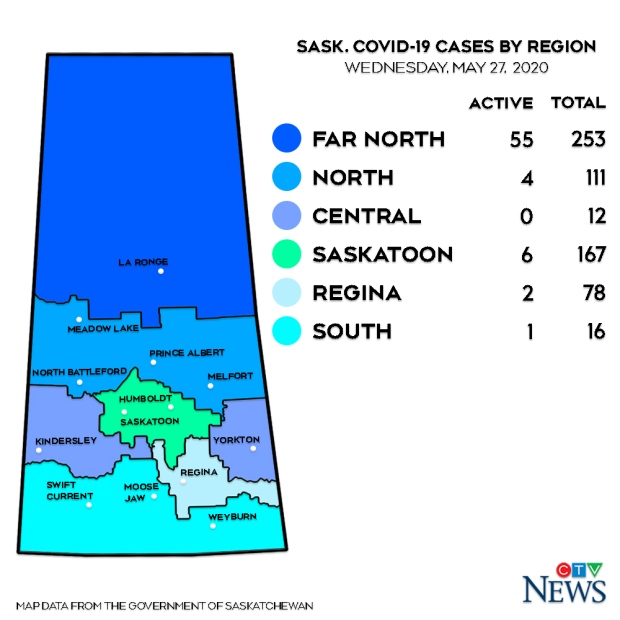 Saskatchewan is recording 141 cases from travel, 363 from community contacts, 77 with no known exposure and 56 are under investigation.

There have been 10 deaths recorded in Saskatchewan.

Shahab says it’s too early to say if there’s been an increase in testing due to expanding criteria in Saskatchewan.

SHA CEO Scott Livingstone said there has been an uptick in calls to HealthLine 811 and referrals, but reiterated that it’s still too early to say if there’s an increase.

“I think we’re going to see more growth in that trend over the weeks to come,” he said.

He also encouraged people who have mild symptoms to seek testing while the economy works to reopen in the province.