REGINA -- The province is Saskatchewan is reporting two new COVID-19 cases on Thursday.

Health officials say one new case is from the north and the other is in the Saskatoon area.

Nine more people have recovered from the virus, for a provincial total of 568 recoveries.

“That’s good news as we are now well into phase two of our Re-Open Saskatchewan plan and we are moving toward phase three on June 8,” Premier Scott Moe said at the province’s daily update. “It shows we are able to safely reopen our economy while at the same time we can continue to control the spread of COVID-19.”

However, the premier said people need to remain vigilant, especially after recent deaths and a community outbreak declared in Saskatoon.

This is the 18th day in a row that there have been more new recoveries than new cases.

“I understand the sacrifice that is being made by families that are not visiting their loved ones in long-term care,” Moe said. 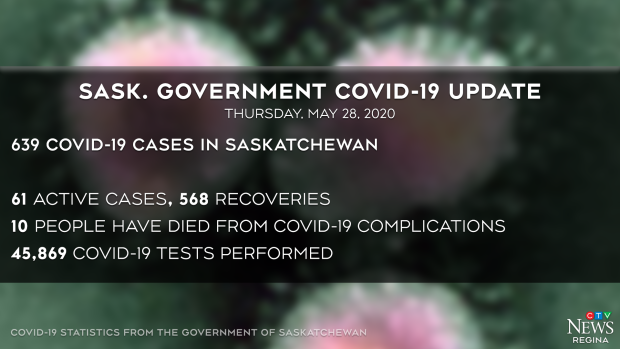 There are four people in hospital — three in the ICU in Saskatoon and one in acute care in Regina.

Active cases peaked at 209 on May 10, but have been steadily declining throughout May.

“The situation in La Loche continues to improve, as well as in other northern communities,” Moe said.

Active cases have dropped from 156 on May 10 to 46 Thursday. He said he expects to remove travel restrictions to northwestern Saskatchewan next week, all while consulting with community leaders.

The rest of the province sits at 15 active cases. 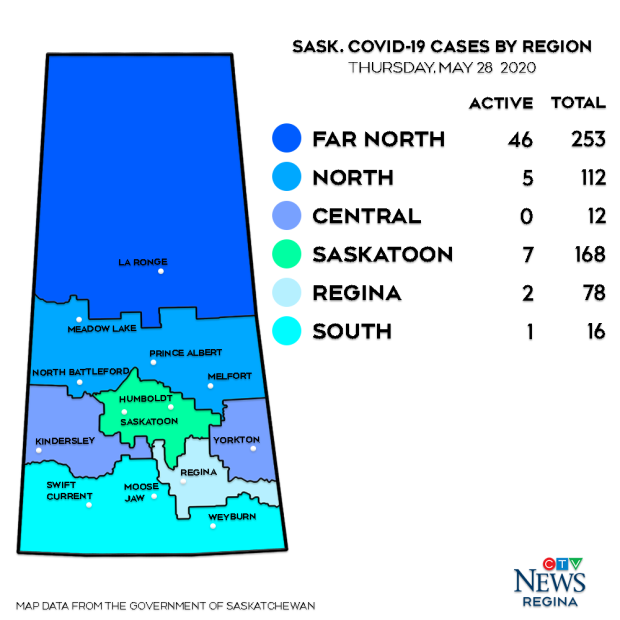 Of the 639 cases in Saskatchewan, 141 are related to travel, 369 from community contacts, 76 have no known exposure and 53 are under investigation.

There have been 10 deaths related to COVID-19 in Saskatchewan.

“So far, phase two appears to be successful, primarily from lessons learned when essential services were open,” he said.

Phase three begins on June 8, and includes other personal services, restaurants and gyms. Shahab said people need to be safe when going to restaurants, since it will provide a different experience than shopping at a retail store in phase two.

Gathering sizes will increase to 15 people indoors and 30 people outdoors during phase three. Shahab said people should be thoughtful about gathering layout and sharing food at events.

“Phase three is going to be very important for us to maintain a case number low as that happens,” he said.

He also said outdoor recreational activities and play grounds are under consideration for phase four. There isn’t a date for phase four at this time.

On Wednesday, the province extended its state of emergency for another two weeks.

Saskatchewan residents are reminded to continue following public health orders even in areas where case numbers remain low. Gatherings are still capped at a total of 10 people.

Health officials are reminding people to cough or sneeze into a tissue or their elbow, practice proper hand hygiene, avoid touching their eyes, nose and mouth and staying home if they’re sick.  The declaration of a community-transmitted outbreak in Saskatoon linked to two large family gatherings, reinforces the importance of following public health orders.

Moe said the possibility of creating a CFL hub city in Regina is something he would be willing to consider in the near future.

“We have not had a direct discussion with respect to what that would look like,” he said. “But we are very hopeful that we would be able to move forward with some type of CFL season here.”

The CFL has considered establishing eastern and western hub cities to host games.