REGINA -- This story was originally published on Friday, May 1. The Government of Saskatchewan has not yet provided updated COVID-19 case numbers for Saturday, May 2.

Of the 26 new cases, 19 are in the far north region, four are in the north and three are in Saskatoon.

It's the most new cases announced in the province since the end of March.

Three of the new cases in the north are in Lloydminster. The far north cases are in La Loche and the surrounding area. 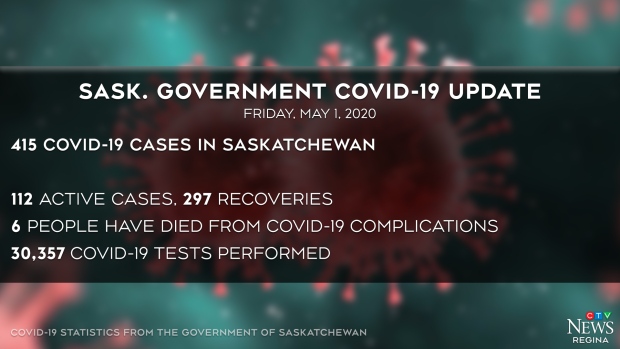 The Saskatchewan Health Authority has also declared an outbreak at Prince Albert’s Victoria Hospital after one positive patient at the hospital. Contact tracing has begun to make to make sure all known contacts can go for testing. SHA CEO Scott Livingstone said officials are also monitoring a “fast-developing” situation in Beauval, although it hasn’t yet been declared an outbreak.

The SHA says 60 to 80 staff are self-isolating due to the COVID-19 cases at the outbreaks at Victoria Hospital and Lloydminster.

Ten people are currently in hospital. Seven patients — four in the north and three in Saskatoon — are receiving inpatient care. Three people are in the ICU in Saskatoon.

The far north continues to have the most active cases at 68 on Friday. The north has 23 active cases.

“We are very concerned with the increase in cases,” Dr. Saqib Shahab said. 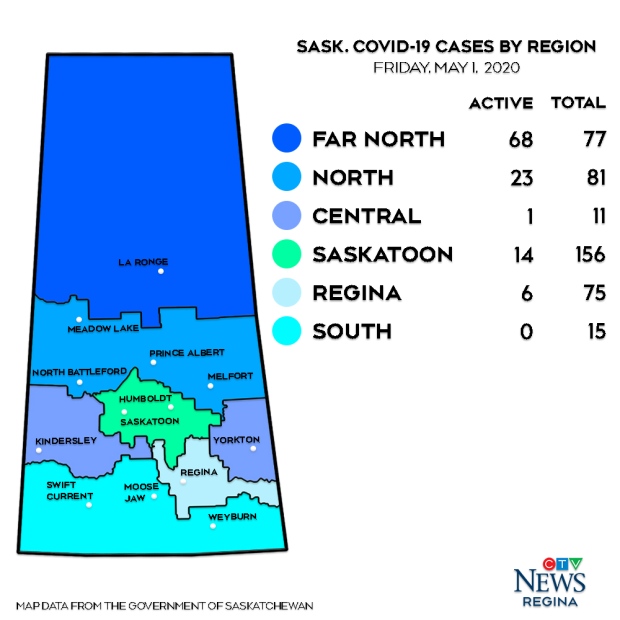 He said the province is dealing with a “rapidly expanding outbreak” in the La Loche area. The travel restrictions and other recommendations are in place to slow down transmission due to the outbreak.

The SHA acknowledged delays in reporting the outbreak at Lloydminster Hospital. Livingstone clarified the outbreak notification was submitted on Monday but wasn’t announced to the public until Wednesday.

“While we don’t believe that there was any additional risk created by this delay, but we do recognize that it should have occurred sooner,” he said.

Livingstone added the SHA will be working to make sure there are no delays in the future.

There are currently travel restrictions in place in northern Saskatchewan to help stop the spread of the virus.

People should only travel to the north if they are returning to their primary residence, or heading to La Ronge or Stoney Rapids.

The Ministry of Health says people shouldn’t stop in other communities or travel between them.

Anyone who can’t maintain two metres of physical distancing in a vehicle is encouraged to wear a cloth face mask.

People should only travel to other communities if they need essential goods or services not available where they live.

People using the grocery store should maintain two metres of distance as well, and should not go shopping if they are feeling sick.

Communities that don’t have grocery stores are encouraged to create bulk purchasing plans to limit travel. They can also work with regional partners to make travel plans for essential goods like groceries and medication.

Re-open Saskatchewan plan to go ahead outside of outbreaks

The first phase of Saskatchewan’s plan to re-open the economy will go ahead on Monday outside of La Loche and Lloydminster.

“Outside of these outbreaks, the rest of Saskatchewan remains pretty quiet,” Shahab said.

Shahab said Friday that the plan remains “on-track,” but added that things may be scaled back if there’s a jump in cases in the coming weeks.

“This will continue for the next several months. Some people are predicting there will be a spike in the fall or winter,” he said. “When things are quiet and things are flat, it’s not responsible to not re-open because that’s essential.”

Shahab also said it’s critical for business to follow any guidelines laid out by the province in the re-opening plan.

“Even if you have no case in your part of the province, those [guidelines] are critical to keep it that way,” he said.

Gatherings are still capped at a maximum of 10 people under the first two phases of the five-phase plan.

There have been 40 COVID-19 cases in health-care workers, but health officials say not all of these cases are related to working in the health-care field.

Of the 415 cases in the province, 138 are travel-related, 163 are from close contacts, 38 have no known exposure and 76 are under investigation.

Six people have died as a result of COVID-19 complications in Saskatchewan.