REGINA -- The province of Saskatchewan is reporting five new COVID-19 cases and nine new recoveries as of Thursday.

One new case is a presumptive positive while the others are confirmed.

Saskatchewan has a total of 331 COVID-19 cases. Of those cases, 57 are considered active. There have been 270 recoveries in Saskatchewan so far. 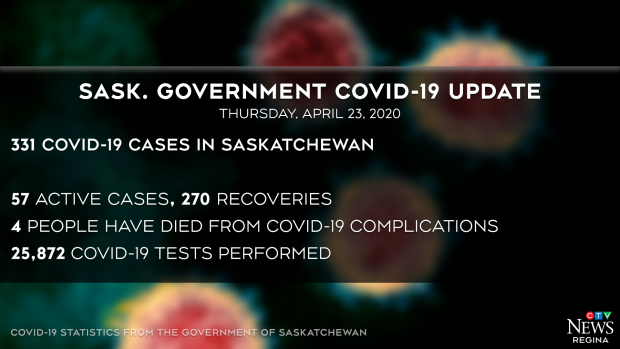 There are currently six people in hospital in Saskatchewan. One person is in the ICU and the other five are receiving acute care.

There are 150 cases in Saskatoon, 71 in Regina, 62 in the north, 22 cases in the far north, 15 in the south and 11 in the central region. Four of Thursday’s five new cases are in the far north. The region was reporting 18 cases on Wednesday.

The province says 136 cases are linked to travel, 142 are from contacts or mass gatherings, 33 have no known exposure and 20 are still under investigation.

Four people have died from COVID-19 complications so far.

Premier Scott Moe cited the high rate of per capita testing as part of why Saskatchewan felt confident in announcing its plan to re-open the economy on Thursday.

The first of five phases is scheduled to begin on May 4.