REGINA -- The province is urging people to be safe after reporting 56 new cases of COVID-19 over the weekend.

These cases have been reported in the central region, the Regina area, the Saskatoon area and the south.

According to information from the government, previous infections reported in the southwest region have spread throughout southwest and west central areas of the province. Eight cases are considered sporadic.

The following rural municipalities have been impacted by the latest cases:

The province say it is working with the Hutterian Safety Council to mitigate the situation. The cooperation of the council has allowed the province to perform additional tests and contact trace in the areas, which helped identify new cases.

Increased contact tracing and testing resources will be in place in the impacted areas in the coming days. Health Minister Jim Reiter says priority will be given to those with active symptoms, and those at a greater risk.

He said there are no clusters of conern in Regina or Saskatoon. 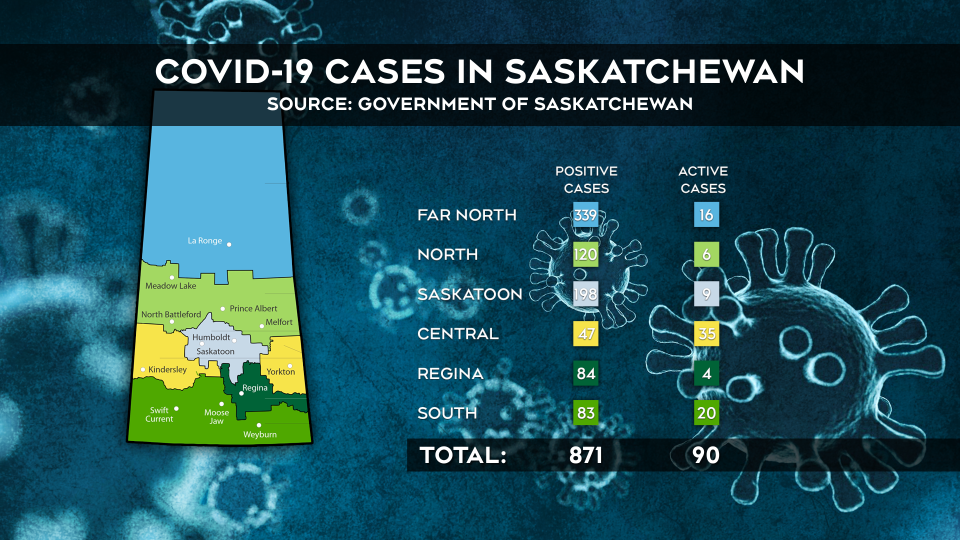 The province reported two new cases on Saturday July 11, 23 on Sunday July 12 and 31 on Monday, bringing the total to 56 for the three days.

By region over the weekend, there were 31 new cases in the central region, four in the Regina area, six in the Saskatoon area and 15 in the south region.

The total number of cases to date is 871, 90 are considered active. As of Monday, 766 people have recovered.

The province has performed 75,161 tests to date.