Residents of a Saskatchewan town lined the streets to show respect and mourning for Const. Shelby Patton, a six-year member of the Indian Head RCMP.

The body of Const. Patton, who was killed while on-duty, was transported to the funeral home in Wolseley, Sask. at around 12:15 p.m. 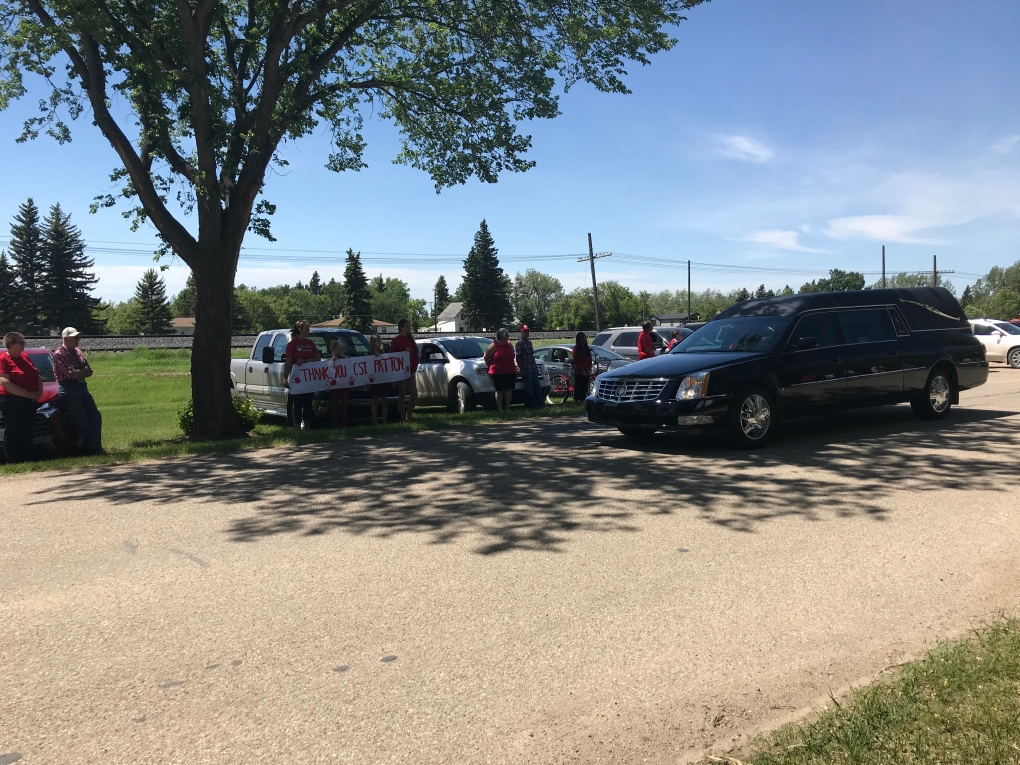 The Saskatchewan RCMP asked residents of the town to line the streets, and wear red as a show of support.

Patton, 26, initiated a stop with a stolen truck in Wolseley around 8 a.m. local time Saturday. He was struck by the vehicle and later died at the scene.

“Today, RCMP employees stand by Cst. Patton’s family, friends and the communities he served and wear red to pay tribute to him,” Saskatchewan RCMP said on Twitter.

Today, RCMP employees stand by Cst. Patton’s family, friends and the communities he served and wear red to pay tribute to him. Cst. Patton lost his life while protecting the public on June 12, 2021. #WearRedSK pic.twitter.com/BxNCtHMeO0

Hundreds of people from Wolseley and surrounding communities lined the community’s Main Street to honour the fallen officer.

Jack Hosler, who lives just outside of town, said although he didn’t know Const. Patton, he showed up to offer support to those who did.

“Just to show respect and gratitude to the police officers, to the community, for everybody across Canada and across the world,” Hosler said. “Something like this is such a tragedy. In a small town, you never think of things like this happening on your doorstep. It happens and you feel just terrible.”

Dozens of RCMP officers descended on the town as they escorted Const. Patton’s casket.

First responders from other communities also attended to pay their respects.

“It’s like a brotherhood we have around here. As firefighters, we’re always out there and when we need the RCMP, they’re there when we need them,” Sirayne Perkins, the fire captain of Cowessess Fire and Rescue, said. “I came out here to show my support and it kind of hits you every now and then because you’re close with the RCMP.”

Gerald Hill, the mayor of Wolseley, said the days since Const. Patton’s death have been surreal. He said community members feel like they’re walking in a dream.

“The community is pretty raw, pretty hurting. You can tell by the turnout that people wanted to pay tribute,” Hill said. “Support like this is what you see in a small town like Wolseley. We’re not unique, you can go to any small town in Saskatchewan and you’ll see the same kind of outpouring.”

The mayor said he was pleased with the turnout for the procession, adding he is honoured that Const. Patton’s casket came to the town of Wolseley.

The Saskatchewan RCMP said a private funeral service will be held by Const. Patton’s family and details of the service will not be made public.