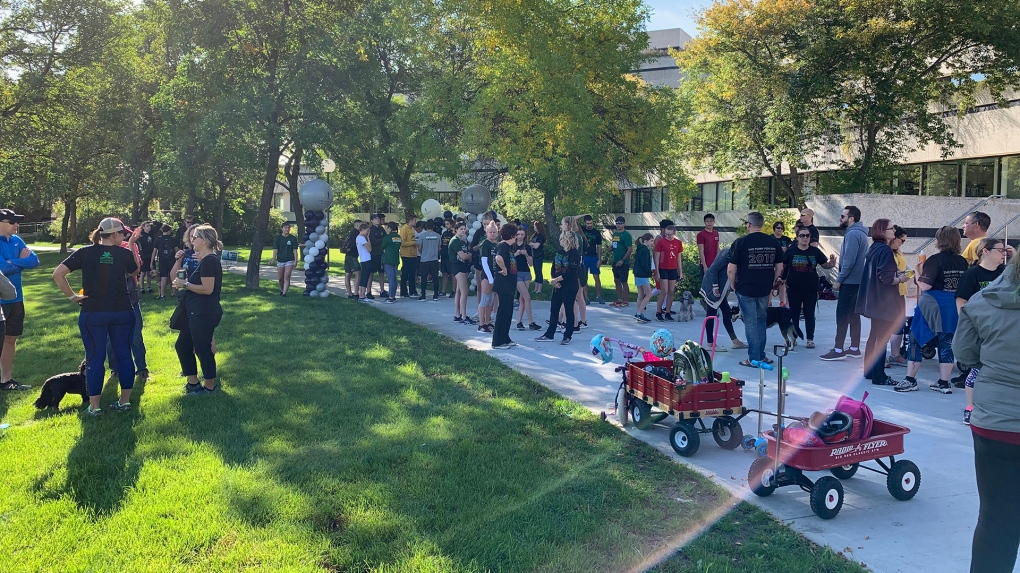 Nearly 400 people participated in the annual Terry Fox Run in Regina on September 15, 2019.

One of Canada’s greatest heroes was front and centre on everyone’s mind in Regina on Sunday morning. The 39th annual Terry Fox Run took place at the T.C. Douglas Building with close to 400 participants coming out to support the Terry Fox Foundation.

Committee member Jade Gritzfeld is a cancer survivor and she said the run has a special meaning for her.

“It’s been 15 years since my diagnosis and when I went through treatment, it was the 25th anniversary of the Terry Fox Run, so there I was going through chemo and watching Terry’s story,” said Gritzfeld. “We don’t have a lot of Canadian heroes, this has grown beyond what even he would have conceived of at that time and it’s very special because there’s a real person behind the start of it all.”

Every cancer survivor taking part in this year’s race was sporting a red shirt as part of Terry’s Team, “It’s just a reminder to say, ‘I love life and I’ve had cancer and it’s done’, or ‘I’m working through the cancer’, it changes your life and it’s reminder about life,” said Gritzfeld.

Turnout was down at last year’s event due to some rainy weather, but the organizers were very pleased to see a sunny morning bring out a big crowd this year.

“I can’t believe that we have this beautiful morning for us to do the run,” Gritzfeld said.

Organizers expect about $40,000 to be raised from this year’s event.

Next year will be the 40th anniversary of the Terry Fox Run and Gritzfeld added that the organizing committee is already looking forward to a special event.

“We’re going to be looking at taking things up a notch for the 40th anniversary and we welcome everyone to come out and remember that there is no ultimate cure for cancer yet, so our work isn’t done,” Gritzfeld said.