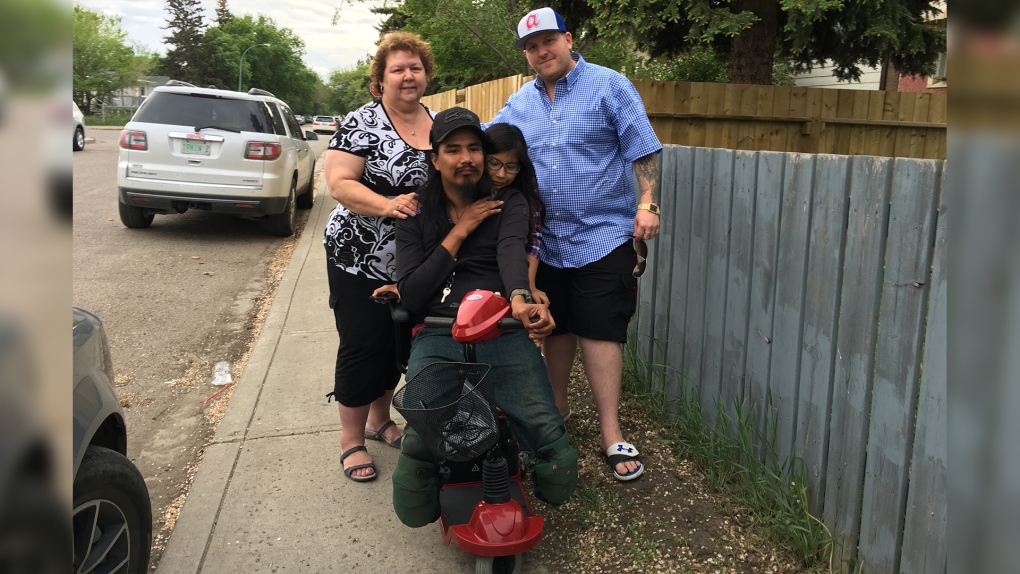 A Regina man offering lawn care services, despite having both his legs amputated, received a special gift Thursday night.

Howard Desjarlais lost both of his legs from the knee down, after two separate accidents required them to be amputated. He began mowing lawns and picking up odd jobs as a way to make money as he searches for employment.

With help from his mother Nettie Quewezance, Desjarlais grew the business to cover over a dozen yards per week, his only limitation being transportation.

On Wednesday, CTV News Regina reported Desjarlais’ story. Sylvia Spicer and Kelly Speiler, a mother-son due who own and operate Party On Entertainment, saw the story and immediately wanted to help.

“I was just scrolling through (Facebook), and saw the CTV story and I read it,” Spicer said. “My heart just broke, and I phoned (Speiler) and said, ‘We’re doing this.’”

Spicer posted on the Facebook story that she wanted to help. Within half an hour, Desjarlais’ brother, Jeremy Desjarlais, messaged Spicer back.

As new business owners themselves, the Spicer and Speiler wanted to help Desjarlais with his booming businesses.

“I knew that (a scooter) was something he was saving for, and trying to get. I know if it was me, I’d want mobility. Just seeing him mow the lawn like that was inspiring,” Spicer said.

Spicer and Speiler bought a scooter online, and then delivered it to Desjarlais Thursday evening.

“I was very happy. I didn't even realize I was going to get it. My mom phoned me and said, ‘They're bringing you a scooter!’ And I was like, ‘Wow.’ I'd like to thank them for that,” said Desjarlais.

“I’m still in shock,” said Quewezance. “I’ve always wanted something like this for my son, but it’s here today, thank God.”

Desjarlais said the support he’s received since the initial story aired has been overwhelming.

“I like that everybody’s helping me out,” said Desjarlais. “It will get me where I want to go, instead of wheeling in my chair all the time.”

A GoFundMe page has been set up to help raise funds for a trailer and ramp for Desjarlais.