'Grateful that we had stopped': Sask. couple avoids fiery Alberta crash that killed 3 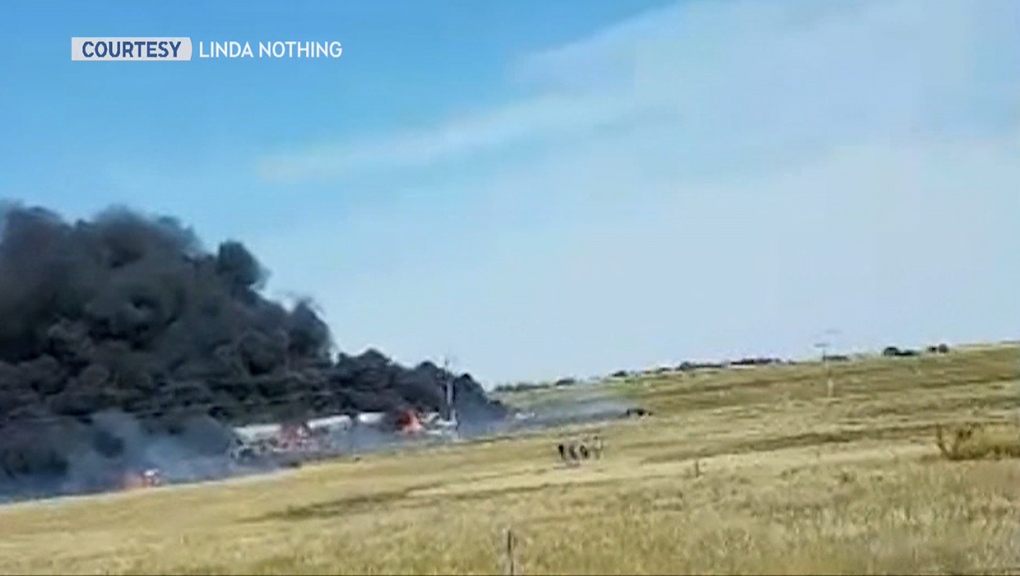 A Saskatchewan man says a well-timed pit stop may have helped him avoid getting caught in a fiery 10-vehicle crash in southeastern Alberta that killed three people.

Dore Germo and his wife left Kelowna, B.C., on Monday after a holiday visiting friends. After a night in Calgary, they were on their way home Tuesday to Warman, Sask.

They stopped for gas and a break in Hanna, Alta., about 80 kilometres from where seven passenger vehicles and three semi trucks collided on Highway 9.

"We were quite grateful that we had stopped," Germo said in an interview Wednesday.

"It just makes you think, 'Could that have been us further up the road?' We just don't know."

The couple spotted smoke as they continued east but thought it was a grass fire.

Then they saw flashing lights and heard sirens. A police officer was running down the middle of the road waving his arms at stopped vehicles.

"I rolled down my window and he was just yelling, 'Get out! Get out!"'

Germo said they were directed to a gravel road to get around the crash, and from there they could make out a tanker truck and burned vehicles amid the smoke.

"It kind of looked like a bomb had gone off because there were these burnt-out vehicles and it was very eerie," he said.

"It was quite a sickening kind of empty feeling once you realized that -- yes -- those are people just going about their day and travelling somewhere."

He said he's praying for those involved.

"The first thing you think of is those poor families."

RCMP confirmed Wednesday that three people were found dead at the crash scene between the small communities of Chinook and Cereal, about 300 kilometres east of Calgary. Ten people were injured, two critically.

One of the trucks that was carrying fuel ignited, causing several vehicles to catch fire, and another truck was carrying butane.

A stretch of Highway 9 was still closed on Wednesday afternoon, while crews cleared the area and recovered dangerous goods in one of the trucks.

"Any time that traffic is moving through or travelling near a construction zone, there's always a concern just generally about travelling safely."

She said a collision analyst was at the site for several hours taking measurements, noting marks on the road and recording where debris had landed.

The investigation could take several weeks, she said, and will also take into account mechanical exams and witness statements. It's too early to say whether any charges are possible, she added.

"We need the public to understand this does take some time."

The RCMP's victim services unit was providing support to people involved in the crash. The unit set up at the legion in nearby Oyen on Tuesday night.

"They're there to offer whatever help they can, even if it's just to listen to somebody and give them a blanket," Scott said.