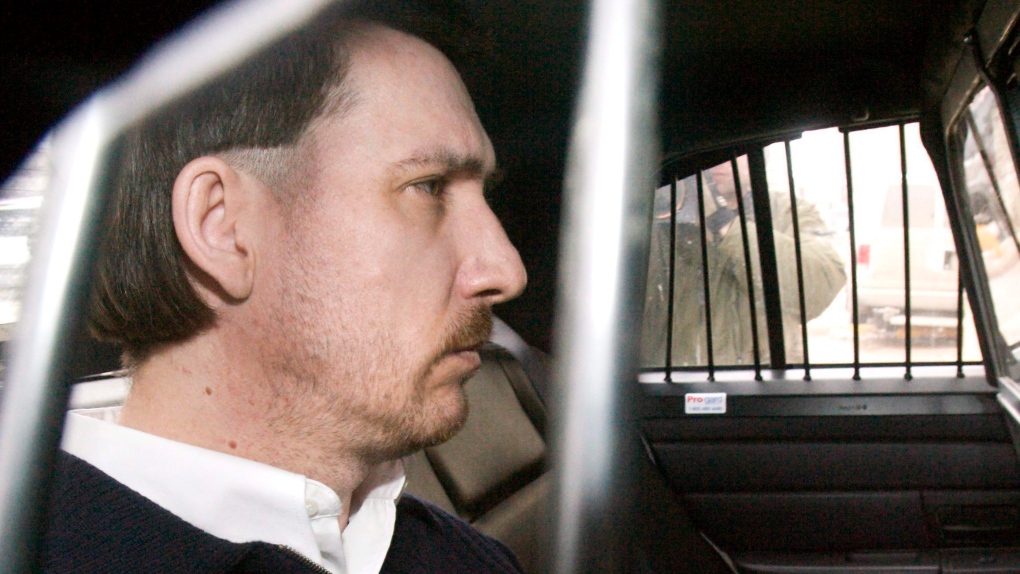 Convicted murderer Curtis Dagenais is escorted from court following sentencing in his murder trial Friday, March 13, 2009 in Saskatoon, Sask. For a Saskatchewan woman who discovered a fugitive Mountie killer hiding in her family's hayfield more than a decade ago, the intense search for two young murder suspects in northern Manitoba stirs old memories. THE CANADIAN PRESS/Geoff Howe

SPIRITWOOD, Sask. -- For a Saskatchewan woman who discovered a fugitive Mountie killer hiding in her family's hayfield more than a decade ago, the intense search for two young murder suspects in northern Manitoba stirs old memories.

Rosanne Smith and her husband Armand managed to convince Curtis Dagenais to surrender in July 2006, after he led police on a nearly two-week manhunt.

The then 41-year-old had gunned down RCMP constables Robin Cameron and Marc Bourdages during a vehicle chase on back roads near Spiritwood, Sask., following a family dispute. Both officers later died in hospital.

Dagenais escaped on foot into the woods. The RCMP set up roadblocks and established a large perimeter around an area where they figured he was hiding.

Smith remembers hearing helicopters overhead and being stopped on the highway as police searched for Dagenais, similar to the way Manitoba RCMP are looking for Bryer Schmegelsky and Kam McLeod, suspects in three killings in their home province of British Columbia.

Smith says she wasn't scared of Dagenais while he was on the run, just cautious. She and her husband had known him from the time he was a boy, as did many others in the area.

One big difference between the search for Dagenais and the search for Schmegelsky and McLeod is that Dagenais had grown up in the area where he was hiding, about two hours north of Saskatoon. He knew how to navigate the landscape and its trails, fields, bush and ponds.

Dagenais had been on the run for 10 days when he spent a night inside Smith's tractor.

The next morning, she and her husband drove into their field. In front of the machine, they noticed moving grass.

"We thought, 'maybe a porcupine,"' Smith recalls. "When he turned his head, we knew who it was.

Dagenais had some ham and bread so he wasn't starving.

He seemed calm as he stood up and approached their vehicle. They started talking, she says.

The couple eventually brought him into their home where they stayed until late afternoon.

"I even let him smoke in our house," she says.

"Nobody smoked in our house. I couldn't even hardly find an ash tray, but I thought: OK, if he wants to have a smoke, then I'll guess we'll let him have a smoke."

Smith isn't sure what the couple said that persuaded Dagenais to walk into the Spiritwood RCMP detachment and turn himself in.

She remembers him being at a loss for what to do next.

"We just said, 'Well you can't be on the run for the rest of your life. I mean, it's not going to work,"' she recalls.

"You're almost a dead duck if you don't give yourself in."

The Smith's farm was outside the area where the RCMP were looking for Dagenais.

"They were looking in the wrong place, but how do you know where to look," she says.

The search could have gone on much longer if it weren't for them finding him that day. Smith says she believes the manhunt could also have ended in more tragedy.

"I wouldn't want to have to go through it again," she says. "It was stressful."

Dagenais is currently serving a life sentence for first-degree murder.