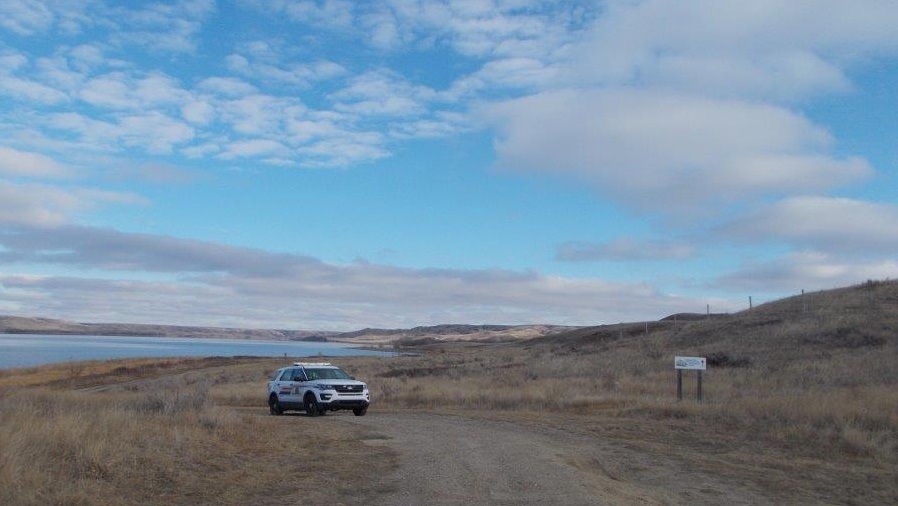 RCMP are continuing to investigate the suspicious death of Logan Curtis Ring as a homicide. (RCMP handout)

SWIFT CURRENT -- Cindy McEwen was used to hearing from her son everyday.

"Everyday, even when he was at his worst. I got texts everyday," she said in a phone interview from Shellbrook, Sask.

McEwen said her 21-year-old son Logan Ring was the type of person who cared enough to put other people first, including her, even while the young father dealt with his own methamphetamine addiction and dealing pot illegally.

The last thing he texted about was getting a new vehicle.

That was in November 2016, after attending treatment and just days before his body was discovered in Saskatchewan Landing Provincial Park, north of Swift Current.

"Never once said he was in trouble, but he wouldn't," McEwen said.

Five people all known to each other and to Ring were charged with his killing, including a family of three: Tanisha Perrault, who was 19 at the time, and her separated parents, Collin Perrault and Jolene Epp.

Details of what happened the night Ring was killed have been subject to a publication ban as each of the accused answered to their charges over the past three years.

Tuesday marked the final step of the court progress, with Epp pleading guilty to accessory after the fact to murder. The judge accepted a joint submission by the Crown and defence for her to serve one year and 251 days behind bars.

Court documents say Tanisha Perrault and Ring had lived together at her house prior to his killing. But court heard that she put an end to that arrangement and that caused "hard feelings" between her and Ring.

"On a social media forum relating to animals, Logan wrote posts wherein he criticized Tanisha for not providing adequate care to her animals," says and agreed statement of facts entered with the court.

Ring's mother said the property was located in Tugaske, Sask., about 160 kilometres from Swift Current, and it was a bad environment.

"He doesn't even remember being there 90 per cent of the time 'cause he went there to get high," McEwen said.

After moving out of Tanisha Perrault's place, Ring moved into an apartment with his friend Rebecca Kuhlman. That arrangement also soured and Kuhlman enlisted the help of her friend Todd Donaldson to kick Ring out.

"In retaliation, Logan told Rebecca that he was going to 'firebomb' Todd's place. Rebecca passed that threat on to Todd," read court documents.

Court heard how things all came to a head on Nov. 16, 2016, when the five accused, who had been drinking, met up with Ring at Lake Diefenbaker.

"Collin and Todd brought out metal bars," court documents say. "It was Collin's plan to 'rough up' Logan as a message not to mess around with his family. Tanisha warned Collin not to go too far with it."

Tanisha Perrault and Epp stayed in the car while Kuhlman, Donaldson and Collin Perrault confronted Ring, who was armed with half a pool cue.

When an argument started, Ring hit Kuhlman with the stick. Kuhlman went back to her vehicle and grabbed a tire iron. Then she, Donaldson, and Collin Perrault began beating Ring.

It was a brutal attack.

"As Collin and Todd are striking Logan, Collin is saying ... 'Bongo, bongo, playing the bongos,"' court documents say. "Rebecca went back to her vehicle and told Tanisha that Logan's eye had popped out."

Ring pleaded with the group to put him out of his misery.

"Collin then reached into his pocket and pulled out a utility knife. He took Logan by the hair and slashed his throat twice."

On Tuesday, court heard Epp lied and told officers investigating Ring's death that others may be after Ring for a drug debt. In all, officers interviewed more than 100 people for their investigation.

In court, Epp's lawyer read a statement from his client where Epp said she misses her daughter and can't imagine the pain Ring's mother must be going through.

Another daughter of Epp's hugged her before she was taken into custody.

"It started as a dispute," Wiebe said. "Family got involved and backed people up and then it got out of hand."

McEwen said waiting for her son's killers to be sentenced has been stressful.

Now that it's over, healing can begin.

"I can finally mourn."

This report by The Canadian Press was first published July 28, 2020.