REGINA -- Last September, the Government of Saskatchewan outlined plans to increase COVID-19 testing in the province to 4,000 tests per day. Since then, the province has only surpassed 4,000 tests in a day twice.

Since the start of 2021, Saskatchewan has averaged 2,601 tests per day, which is well short of the province’s target.

With the first cases of the U.K. variant detected in Regina this week, public health experts say it is critical the province increases its testing numbers.

"With those variants here now, we really have to be doing those tests," Dr. Nazeem Muhajarine, an epidemiology and public health professor at the University of Saskatchewan, said.

Saskatchewan averaged 2,683 tests per day during November and December. 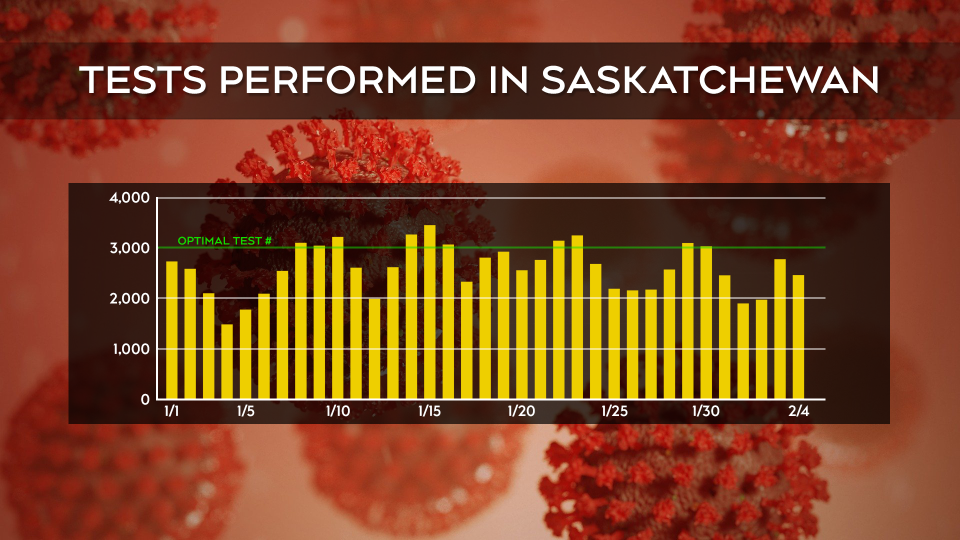 "When the test positivity rate is above ten, it tells us that the virus is in the community in a big way," Dr. Muhajarine said.

The NDP is concerned about the impact of low testing numbers and the more highly contagious variant arriving in the province.

"Our on-going under testing, under performing in contact tracing, while we have rising case numbers and rising death tolls in Saskatchewan, it’s unacceptable," NDP Leader Ryan Meili said.

The NDP would also like to see rapid testing used in schools and long-term care homes.

Dr. Muhajarine agreed that rapid testing is the best proactive defence against the virus in certain areas.

"One big puzzle for me and for others is why we don’t implement a rapid test," he said. "Going forward, we really need rapid testing to compliment the PCR tests."

The Saskatchewan Health Authority said it has identified 75 care facilities for rapid testing use and is looking into using the testing at correctional facilities in the province as well, but it’s still in the early stages.