'It's exciting to be with the best players in the country': Bedard gearing up for WJC Selection Camp

'It's exciting to be with the best players in the country': Bedard gearing up for WJC Selection Camp 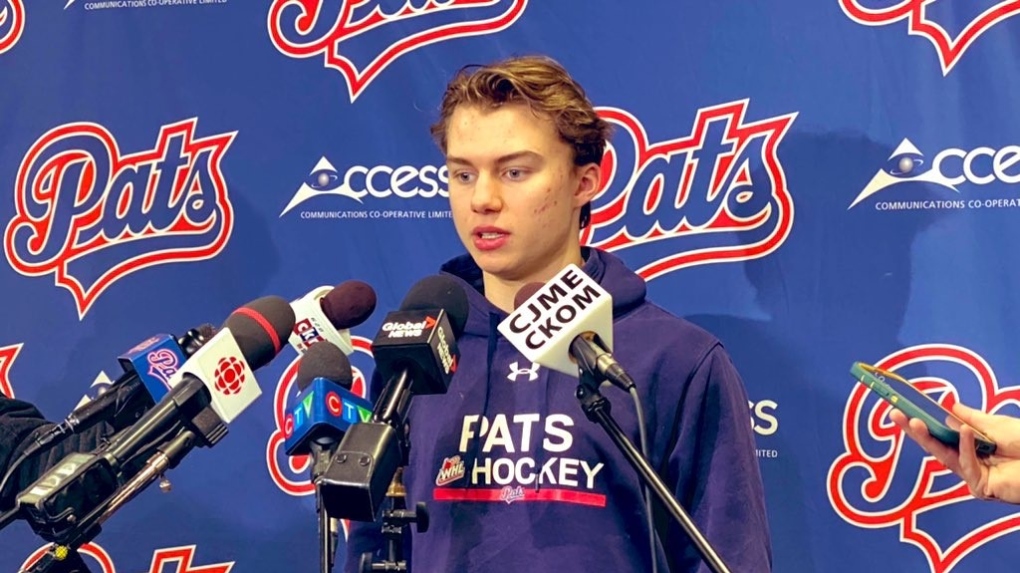 Regina Pats captain Connor Bedard addressed media in the Queen City on Wednesday for the final time before he heads off to Canada’s 2023 World Junior Championship Selection Camp.

The 17-year-old centre represented Canada last year when the tournament was cancelled midway through due to COVID-19 cases. However, Bedard had five points in his two games. Once the tournament resumed in August, Bedard went on to record eight points in seven games on route to winning a gold medal with Team Canada.

On Tuesday it was announced Bedard was once again named to Canada’s roster and is considered a lock to make the team. Bedard is on a 27 game point-streak with a total of 64 points in that stretch.

“It’s exciting, it’s kind of weird for I think the country to have two of them within four months now, but for us it’s super exciting,” Bedard said. “Halifax is a pretty cool spot to have it, I think it’s been sold out for months now. It’s exciting to be with the best [junior] players in the country.”

Even though Canada came out on top in what was considered the 2021 tournament, Bedard will look to bring this season’s improvements to the team.

“I think probably my face-offs have improved a lot and I’ve been pretty good in the circle this year. Whether I’m playing centre or wing there I’m not too sure, we’ll see if I can help bring that to the table,” said Bedard. “We have a lot of guys that are probably a lot better than me at face-offs but if I get the opportunity to be on a big face-off guy, I think it’d be exciting.”

“When he came back last year, he came back with just some new confidence. Playing with all those elite players and obviously the success he had, I think he realized the next level he could go with his game,” Regina Pats assistant coach Brad Herauf said on Bedard’s improvements following last year’s tournament.

It is already a busy season for Bedard, who saw sold-out crowds on the Pats’ most recent road trip to B.C., as well gearing up for the 2023 National Hockey League (NHL) draft and with the pressure of the World Junior Hockey Championships right around the corner, the forward is still finding time to reflect on the game he loves.

“I think the first time you put that jersey on every tournament, it’s pretty surreal. You kind of take a step back and kind of want to thank the people that have helped you the most. It’s one of the biggest hockey tournaments in the world, so it’s an honour,” Bedard said.

The Department of National Defence says Canada is working with the United States to protect sensitive information from foreign intelligence threats after a high-altitude surveillance balloon was detected.

Are magic mushroom stores the next pot shops?

Magic mushroom dispensaries are popping up in cities across Canada, with customers ranging from those looking for treatment for depression or PTSD to people wanting to 'micro-dose' a small amount of psilocybin, the hallucinogenic compound in magic mushrooms. But while the situation is in some ways reminiscent of when cannabis retailers set up shop before marijuana was legalized in 2018, Health Canada says there are no plans to legalize or decriminalize psilocybin products.

Hundreds of customers who scan QR codes for restaurant menus across Canada are being surprised by secret menus instead, revealing the hidden costs behind the food they eat.

One of Saskatchewan’s oldest hockey rinks has garnered national attention for its unique features and unusual design.

A paramedic signing off for duty for the last time got choked up and teary-eyed during his final radio call to colleagues.

Quebec recommends booster only to vulnerable never infected with COVID-19

Quebec is changing its vaccine strategy: public health officials are now recommending booster shots only for vulnerable people who have never had COVID-19.