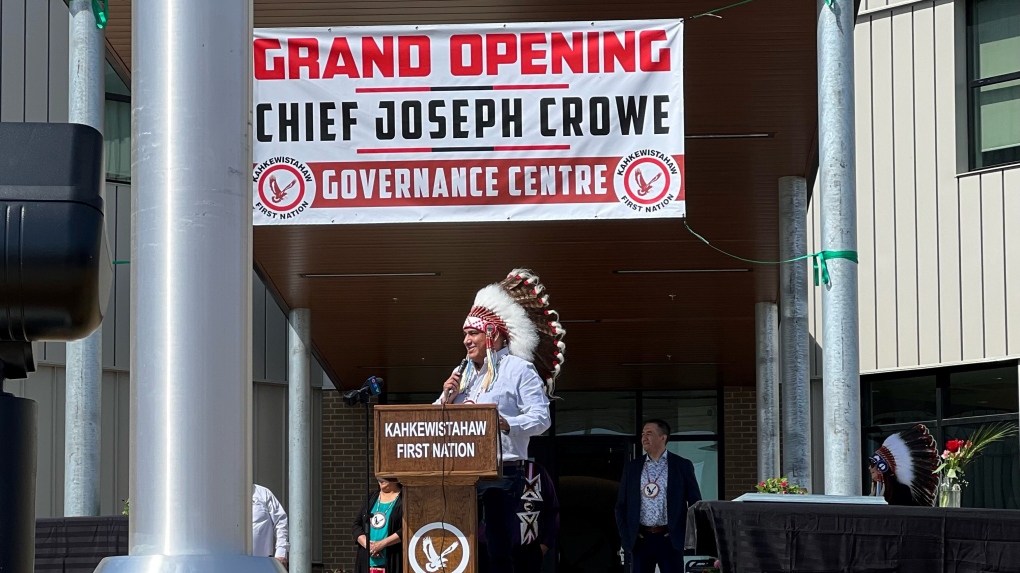 Friday, Chief Taypotat didn’t hold back his thought’s on the company’s handling of Indigneous engagement.

“When they're sitting in front of you, everything's good. Everything's promised. (Mosaic says), ‘We'll help you, help your people.’ And basically, they say it in-person, face to face, they say it on their website, but their actions are the opposite of what they say they're going to do,” Chief Taypotat told CTV News.

What Taypotat is referring to stems from the lack of contracts awarded to Kihew Fabco, a business in the steel manufacturing business in nearby Melville, Sask. The First Nation partially owns the facility, and over the last year has reached out to Mosaic to offer help, from a local manufacturer.

Chief Taypotat said the two parties have spoken, both in Melville at the First Nation’s offices, along with down in Florida, where the company is headquartered.

Since then, the company has awarded a contract to the First Nation — but the size of that contract is one of Taypotat’s issues.

It wasn’t the answer the First Nation was looking for, however.

“They came back and said it was too high, too expensive for them and that we did not get awarded the contract. To me, that's a slap in the face,” Taypotat said.

It added that over the last two years, it has included Kihew in 109 bids for work, with three bids sent in.

“After working closely with them, we did award them work in 2022 in the hopes that this would lead to a mutually beneficial and long-lasting relationship,” reads the statement.

The company continues to say it will put $1.2 billion in resources taxes and royalties to government in 2022. It added that it has made “significant progress” on all of the key pillars of Indigenous engagement.

“We commit 15% of our community investment dollars to Indigenous organizations and partners. In 2022 we will have spent almost 24%.

“In 2022 we wanted to have 8% of our spend be with Indigenous vendors and we have met that target – our goal is to have that number to 15% by 2025 and we make progress every year on this one,” the statement continues.

Taypotat labelled the company’s handling of Indigenous engagement as throwing “trinkets and beads” to the First Nation.

“It's not true reconciliation. Part of reconciliation is action, right? And Mosaic does not do that. They will throw us one contract and they will say, ‘Okay, we gave those First Nations folks one contract. Let's go back to our old buddies, and keep giving them the contracts,’” he said.

In looking forward for a solution to the dispute, Taypotat said he is ready to fight for what is right.

He said he is prepared to go to the Supreme Court if need be, and wants yearly dividend donations to the Kahkewistahaw community, along with contracts through the steel manufacturing company in Melville.

“They should have shook our hand four months ago, and we should have had work in Melville right now — but we don't. So, what we're looking for now is contracts, donations to the community, and so on,” he said.