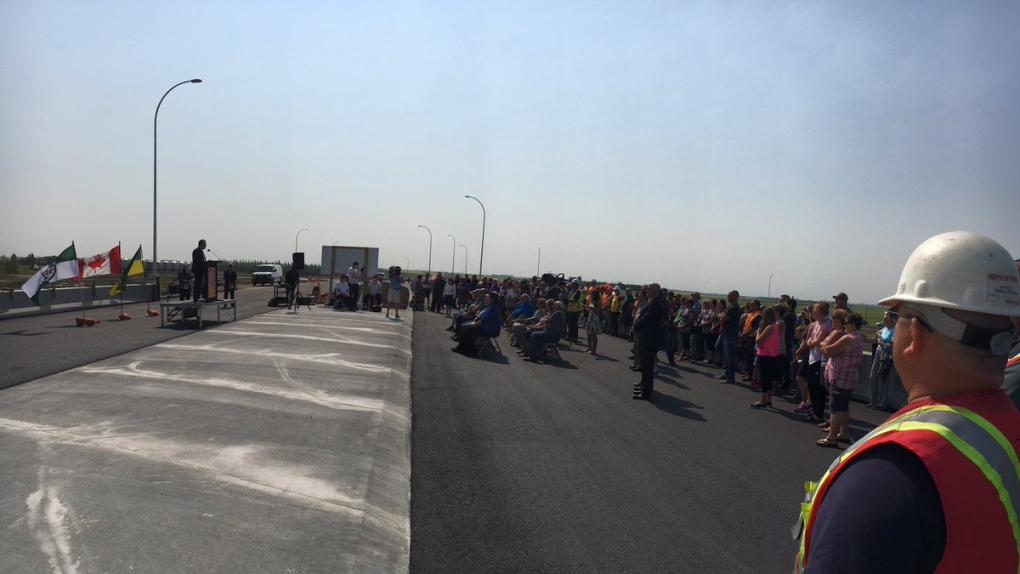 The new Balgonie overpass is seen in this photo taken Thursday, July 20, 2017. The overpass is scheduled to open to traffic early next week. (JAMIE FISCHER / CTV REGINA)

The new Balgonie overpass is set to open to traffic early next week.

It will be the first overpass to open on the Regina bypass, less than two years after construction started.

The Balgonie overpass includes two roundabouts, which are designed to accommodate large vehicles, such as farm equipment.

“The roundabouts provide many benefits over standard intersections, including fewer stops, shorter delays (and) fewer spots where collisions are likely to occur and increased safety,” the Saskatchewan government said in a news release Thursday.

Highways and Infrastructure Minister David Marit says the bypass will address safety concerns for the communities along Highway 1 east of Regina.

“The opening of the overpass will alleviate congestion and provide a safer journey for drivers,” Marit said.

Opening the overpass to traffic will allow Regina Bypass Design Builders to complete the remaining construction around the overpass. In order to facilitate the work, the current intersection at Highways 1 and 46 will close, with traffic rerouted to the overpass.

“This overpass is important to the future of Balgonie because it will allow safer access to the community while increasing safety for people travelling on the highway,” said Balgonie Mayor Frank Thauberger.

The first phase of the bypass construction between Balgonie and Highway 33 is expected to be completed this fall, including overpasses at Balgonie, White City and Tower Road. The Pilot Butte overpass is slated to open to traffic in 2017 and be fully operational in 2018. The remainder of the bypass is scheduled for completion in 2019.

“With more than 5,000 people living and working in the RM of Edenwold, we hope the safety and traffic flow improvements this project has brought to our municipality and the White Butte Region will enable the continued growth of our communities and leave a legacy of connectivity and safety for generations to come,” said Rural Municipality of Edenwold Reeve Mitch Huber.

The Regina bypass is the largest transportation infrastructure project in the province’s history.