'Nothing has impacted me like this': Regina's head of ICU describes grim reality as COVID-19 admissions double in April

The number of patients being treated for COVID-19 in Regina’s ICU has more than doubled since March 25; from 12 to 30 on April 25.

He said that over his 30-year career in the community, he’s never experienced anything close to the dire circumstances presented by COVID-19.

A Saskatchewan Health Authority (SHA) physician town hall held on April 22, data was presented that showed the province’s total ICU capacity is slowly pushing toward what it calls the “red zone” which would see 116 to 150 patients in the ICU and force significant service slowdowns.

If the province reached that level, the SHA states the ratio of staff to patients would be "significantly altered," non-traditional ICU staff would be utilized, service slowdowns and cancellations would occur and triage would be widely applied.

One of Regina’s COVID-19 units at the General Hospital has already surged into another unit- the nearby cardiac care unit. Dr. Betcher said several beds have been added to the already full unit, which means it’s operating above its maximum capacity. He also said some patients have had to share rooms with each other; an uncommon practice in intensive care.

Normally, between Regina’s Pasqua and General Hospital’s there are 27 beds in intensive care:

The General hospital has expanded to include eight additional beds in the cardiac care unit, and four more in the surgical ICU for a total of 22 beds. It has the capacity for two more beds in cardiac care. There are an additional seven beds on another unit that can be utilized.

The Pasqua hospital has expanded to include six more beds in its ICU for a total of 13. It has the capacity to reach 15 in total.

Dr. Betcher estimated the total capacity of Regina ICUs to 46 in the short term. He said there is a plan in place if ICU admissions surge beyond that number.

Dr. Betcher said currently in ICUs, the age demographic is significantly lower than what would normally be seen in the unit.

“It’s very emotional. We’re speaking with fathers and mothers of young children in ICU. We’re having to sometimes have end of life discussions with spouses, who want to know if their young children can see them, and we will try to FaceTime and call the kids so that they can see their mom or dad or talk to them, but their mom or dad can’t talk cause often they’re so sedated they’re not awake. But sometimes they can say things like ‘I love you’,” Betcher said.

He said that in some situations, staff aren’t able to have end of life conversations with family members in person, since often the families members of patients are in quarantine.

“Sorry it’s hard for me, because they’re all young,” Dr. Betcher said, briefly becoming emotional while recalling a recent patient in ICU.

“We’ve had some patients whose wives are pregnant with their child, and they’re not able to be there. And they’ve had to give birth without the father, their husband there. Yeah, it’s a huge impact. It’s hard to describe it.”

According to Dr. Betcher, depending on a patient's specific needs and condition, some are being transferred out of Regina to other intensive care units in the province. He called this practice “load-levelling.”

“We will take patients that are more stable to transfer to other hospital’s ICUs. For instance if you need to be in a large centre and you’re safe to travel there we would send you to Saskatoon,” Dr. Betcher said.

If a patient's needs don’t require the resources of a major city hospital, they could be transferred to smaller cities like Moose Jaw, Yorkton, Prince Albert or North Battleford. 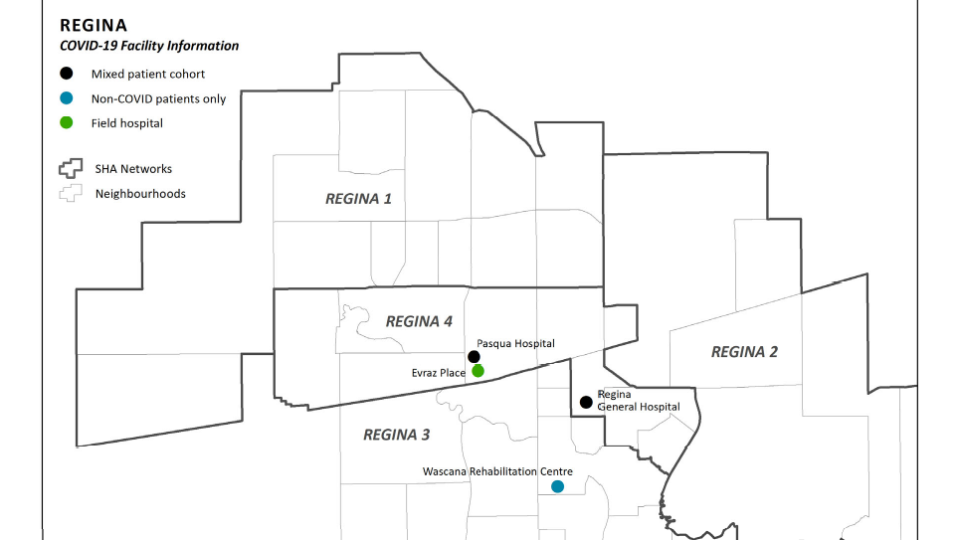 There are four COVID-19 treatment facilities planned in the City of Regina. (Map by: The Government of Saskatchewan)

As ICU admission more than doubled over the last month in Regina, hospitals continue to rotate ICU staff and add additional support staff when able, to give staff a chance to rest. Betcher said despite these measures, staff are still suffering from exhaustion.

“Out on the front lines, they’re doing a great job, and excellent job, everybody’s stepped up and they’re holding it together,” Betcher said. “But my concern is how sustainable this will be in the long run.”

Dr. Betcher emphasized the major role that the average citizen plays in the situation in Regina ICUs.

“Obey the public health orders, wear a mask, get tested if you have symptoms,” he said.

“And get vaccinated at the first opportunity you have. I don’t think you can overemphasize that given some of the protests that are going on with some people doubting that this is a reality.”

“It’s really disappointing that there are those who think this is not real.”