REGINA -- Officials and community members from Saskatchewan and across Canada are sharing messages of mourning after an RCMP officer was killed on-duty Saturday.

“Very sad news from Saskatchewan tonight,” Prime Minister Justin Trudeau wrote on Twitter. “Sending my deepest condolences to the family and loved ones of [RCMP] officers Shelby Patton – know that I’m keeping you in my thoughts.”

Very sad news from Saskatchewan tonight. Sending my deepest condolences to the family and loved ones of @RCMPGRCPolice officer Shelby Patton - know that I’m keeping you in my thoughts. https://t.co/Yk1BQAdQ14

Const. Patton, 26, initiated the stop with a stolen truck in the town of Wolseley, Sask., around 8 a.m. local time Saturday. He was struck by the vehicle and later died at the scene.

“It is with tremendous sorrow that Saskatchewan mourns the loss of RCMP Constable Shelby Patton, who was killed in the line of duty this morning,” Saskatchewan Premier Scott Moe wrote on Twitter. “Our grief is only matched by our tremendous gratitude to Constable Patton for his service, and to every police officer who serves and protects us every day.”

“I extend my condolences to all who knew and loved Constable Patton,” Jagmeet Singh, Canada’s NDP leader wrote.

This is a tragic loss for his family and community.

I extend my condolences to all who knew and loved Constable Patton.https://t.co/2RcoD3HRzC

Jeff Slinn an intermediate care paramedic with Indian Head Ambulance, called Patton “a friend to many.” He described his relationship with Patton as mostly professional, but said they played on a community slo-pitch team together.

“It’s a small community as far an Indian Head and the surrounding area,” Slinn said. “We’re all one family, we work very close with police on a day-to-day basis, they’re here to protect and serve us and they do that job every day.”

Local paramedics on shift have also stopped to bring flowers and pay their respects to Constable Patton and his RCMP family. Staff inside the detachment said Shelby was the ideal RCMP officer, hard working and always professional. pic.twitter.com/8seQj3SN5u

In Indian Head, Sask. where Patton was a member since 2015, a growing memorial of flowers can be seen outside the RCMP detachment.

Slinn, who has been with Indian head Ambulance for 21 years, said he felt compelled to bring his children to the growing memorial for Patton. 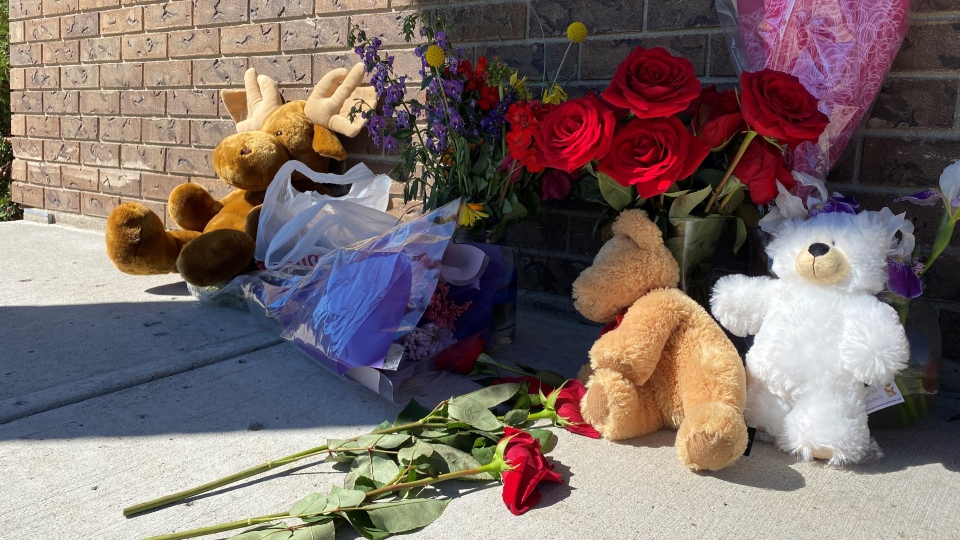 “I think it’s important for the community and our kids to understand what the RCMP do for us, and what they sacrifice to be here,” Slinn said.

The mayor of Wolseley described a state of shock in the community on Saturday evening, after the incident.

Wolseley Mayor Gerald Hill explained the situation is difficult to comprehend, especially for an officer early in his career.

Flags at detachments around the province will be lowered at half-mast until his funeral.

Many in the law enforcement community across the country have shared their condolences online.

“Thoughts and prayers are with the family, friends and colleagues of the [RCMP officer] lost in the line of duty today,” Evan Bray, Chief of the Regina Police Service tweeted. “On behalf of all us [at Regina police] we stand beside you and offer support through this difficult time.”

Thoughts and prayers are with the family, friends and colleagues of the @RCMPSK lost in the line of duty today. Tragic loss. On behalf of all us @reginapolice, we stand beside you and offer support through this difficult time. pic.twitter.com/3ZqaS54XpX

“Our condolences to the family, friends and colleagues of RCMP Constable Shelby Patton,” Edmonton Police wrote.

Our condolences to the family, friends, and colleagues of RCMP Constable Shelby Patton. Const. Patton was killed in the line of duty during a traffic stop Saturday near Wolseley, SK. pic.twitter.com/TXAxD013vf

“We grieve the tragic loss of [Const.] Shelby Patton,” tweeted the Halifax Police.

We grieve the tragic loss of Cst. Shelby Patton. We keep in our hearts everyone touched by his untimely loss. Thank you for your service, Cst. Patton. @RCMPSK @rcmpgrcpolice @RCMPNS https://t.co/ibOWz6pHAN