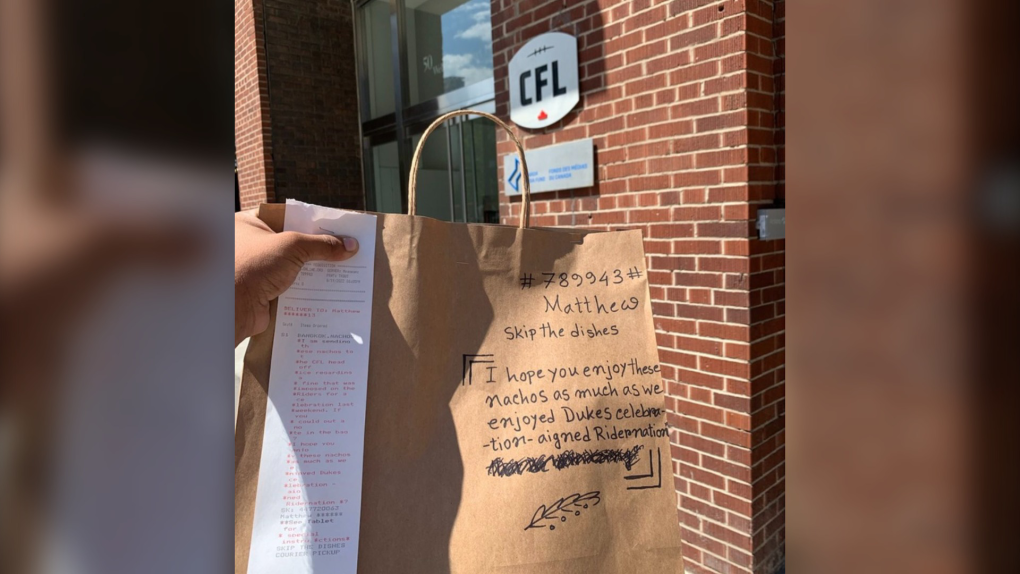 A Saskatchewan Roughriders fan chose a unique and cheesy way to protest a recent fine handed down by the Canadian Football League (CFL).

Twitter user Matthew McGillivray said he tried to send some nachos to the CFL head office in Toronto, in reference to a recent touchdown celebration by wide receiver Duke Williams.

A message on the take out bag reads, “I hope you enjoy these nachos as much as we enjoyed Duke’s celebration. Signed, Rider Nation.”

Unfortunately the @CFL head office was either closed today or @RandyAmbrosie and the rest of the staff are still working remotely. But I tried to send them some nachos and my skip delivery driver was nice enough to send me this picture! #RiderNation #CFL pic.twitter.com/cTE6UtpbBW

After scoring a touchdown near the end of the fourth quarter in a matchup against the Edmonton Elks, Williams leapt into a section full of Riders fans behind the end zone, sat down and helped himself to some nachos.

Cody Fajardo to Duke Williams for a TD near the end of the 4th! #CFL pic.twitter.com/tVevF1UYaQ

Williams was fined for violating the CFL’s security protocol during the game, the league announced Thursday.

“I wanted to make a point that fan interaction is important as fining players for celebrating with the reduced fans that are attending this year does not prompt this league,” Matthew McGillivray told CTV News.

“So wanted to show the league we stand behind these type of celebrations and they are in fact good for the league.”

An online fundraiser was also started to help Williams pay the fine. The campaign has raised over $1,000 as of Friday afternoon.

The Saskatchewan Roughriders take on the B.C. Lions at Mosaic Stadium on Friday night at 8 p.m.

Many trapped in Florida as Ian heads toward South Carolina

Rescue crews waded through flooded streets and used boats Thursday in a scramble to save people trapped after Hurricane Ian destroyed a cross-section of Florida and brought torrential rains that continued to fall. The destruction began to come into focus a day after Ian made landfall in Florida as one of the strongest hurricanes ever to hit to the U.S.

Hundreds of royal fans lined up outside Windsor Castle for the chance to pay their final respects to Queen Elizabeth II as the chapel where the late monarch was buried opened to the public Thursday for the first time since her death. The queen's death certificate says the 96-year-old monarch died of old age.

Quebec's immigration and labour minister claims that newcomers to the province "go to Montreal, don't work, and don't speak French," though he later tweeted he expressed "his thoughts badly."

The family of an Indigenous woman who was mocked by staff as she lay dying in a Quebec hospital in September 2020 has filed a lawsuit seeking nearly $2.7 million.

Russia to annex more of Ukraine on Friday

Russia planned to annex more of Ukraine on Friday in an escalation of the seven-month war that seemed sure to further isolate the Kremlin, draw it more international punishment and bring extra military, political and economic support to Ukraine.

A rift has emerged in the Danish royal family following a decision by Queen Margrethe to strip four of her eight grandchildren of their royal titles in order to "future-proof" the monarchy.

Diabetes risk twice as high for those who feel lonely: study

People who feel lonely are twice as likely to develop Type 2 diabetes, according to a new Norwegian study that analyzed data collected from more than 24,000 people over more than 20 years.

Gas prices jumped overnight in some cities across Canada by as much as almost 20 cents.

A beauty queen from Myanmar who took refuge in Thailand after criticizing her home country's ruling military junta has left Bangkok for Canada where she is expected to seek asylum.