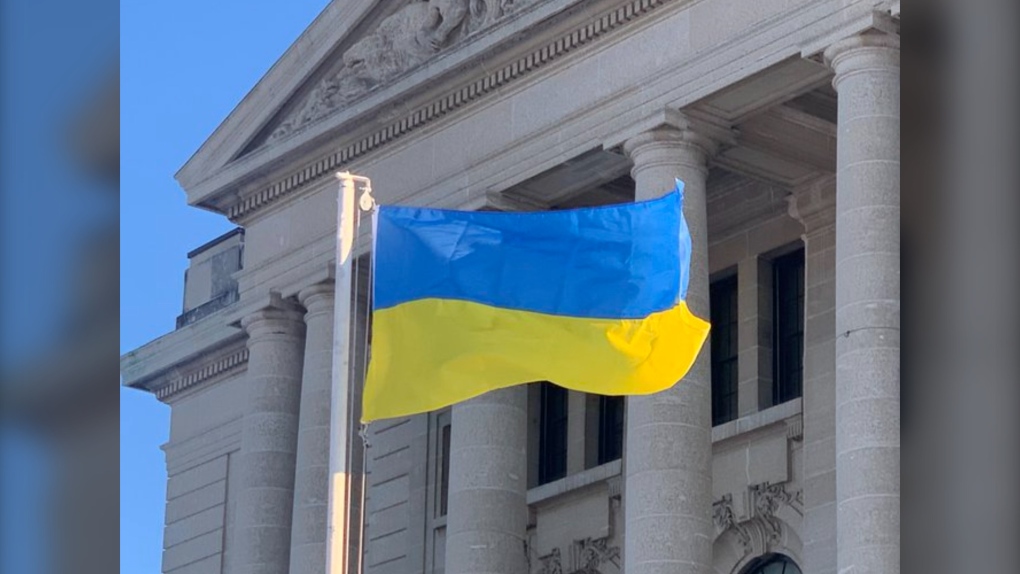 The Ukrainian flag is being flown in solidarity at the Saskatchewan Legislative Building. (WayneMantyka/CTVRegina)

Saskatchewan is sending a delegation to Germany to help support displaced Ukrainians.

Terry Dennis, the Legislative Secretary Responsible for Saskatchewan Ukraine Relations, was called upon by Premier Scott Moe to lead the delegation to Germany. The announcement comes following the premier’s visit to a Ukrainian refugee centre in Kassel, Germany last week with Stéphane Dion, the Ambassador of Canada to Germany.

Dennis said their small delegation will travel to Germany at the end of the week so they can identify the additional supports Saskatchewan can provide to displaced Ukrainians.

"During the vicious attacks by Russia in Ukraine, we've been working hard to listen and learn from the brutal experience of those having to flee Ukraine," he said.

The delegation will meet with the embassy of Canada in Berlin, local government officials and non-governmental organizations supporting displaced Ukrainians.

Matsiuk, who emigrated to Canada from Ukraine in 2011, said being on the ground to meet with Ukrainians will ensure they are able to understand their needs and continue to help in every way possible.

"Throughout the war I've been working closely with friends and family in Ukraine around the clock to try and help provide the necessary supports to ensure displaced Ukrainians have the resources they need during this horrific time," she said.

The delegation will be in Berlin from April 10 to 13.

Police in Newfoundland and Labrador say two people were swept out of residences that collapsed into the sea as post-tropical storm Fiona hit Saturday.

The town of Port aux Basque in Newfoundland is under a state of emergency as first responders cope with electrical fires, residential flooding, and washouts due to post-tropical storm Fiona.

Municipal roads are closed on Quebec's Magdalen Islands and residents are ordered to stay inside as the region battles the effects of Fiona.

High winds knocked out power in thousands of homes in Nova Scotia and P.E.I. Friday night as people in Atlantic Canada began feeling the wrath of Fiona.

What will happen to the wild horses on Sable Island impacted by Fiona?

Shaggy, long-maned wild horses grazing freely on the sandy grasslands of the crescent-shaped Sable Island in the North Atlantic are expected to come under the swipe of a powerful storm forecast to hit eastern Canada this weekend.

Russian forces launched new strikes on Ukrainian cities Saturday as Kremlin-orchestrated votes took place in occupied regions to create a pretext for their annexation by Moscow, while hundreds of people were arrested in Russia for protesting a military mobilization order aimed at beefing up the country's troops in Ukraine.

The decision to put an end to some of the last vestiges of federal COVID-19 restrictions is expected to be announced officially on Monday.