REGINA -- Saskatchewan recorded its sixth death due to COVID-19 complications on Wednesday, according to a release from the province.

The person was in their 80s living in the far north region. 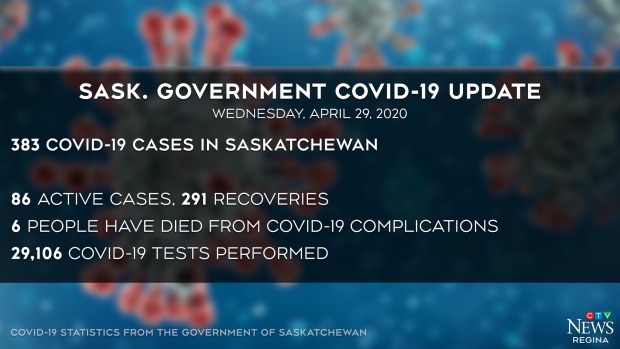 The province confirmed 17 new COVID-19 cases bringing the provincial total to 383. Of the 17 new cases, 11 are in the La Loche area in the far north, five are in the north region, including four in Lloydminster, and one is in Saskatoon.

Premier Moe asked for more extensive testing in the La Loche area in a press conference Wednesday, to help curb the current outbreak situation. The premier said the Saskatchewan Health Authority is in the process of deploying 50 to 100 additional staff to the area.

More equipment is also being sent to help improve testing and contact tracing practices in the community.

Testing frequency will also be increased to include drive through tests, door to door testing for people who have been in contact with the virus and tests for anyone who wishes to be tested from the La Loche community.

Moe said testing will focus on the staff and residents of long term care facilities and health care centres.

“We need to identify positive cases as quickly as possible when we have outbreaks such as these,” said Moe.

Additional personal protective equipment was shipped to the La Loche area on Wednesday morning. Moe said the Federal Government will supply 25,000 procedure masks as well as 25,000 pairs of gloves for the region.

Of the total 383 cases, 86 are considered active. Fifty-two active cases are located in the far north.

Cluster of cases in Llyodminster

According to the province there are 13 cases of COVID-19 linked to the Llyodminster Hospital. Five cases are in healthcare workers and eight are in patients.

Officials believe that transmission occured in the hospital, and non COVID-19 patients may be sent to another hospital.

Phase one of the Reopen Saskatchewan plan was scheduled to begin throughout the province on Monday, but it will now be delayed in La Loche and Lloydminister, due to the outbreaks in those communities.

Although Saskatchewan saw its second double digit case increase in two days, Premier Moe said the government feels confident moving forward with the Reopen Saskatchewan plan throughout the rest of the province.

“It is a phase that involves a number of medical services that otherwise would be provided here in the province. We feel confident that we have had a number of businesses that have been open all along throughout this, providing essential services to our communities all along, throughout the course of the last month, and we have been able to flatten the curve, by and large, right across the province,” said Moe.

“We’re confident that we can do so in these two isolated outbreaks.”

Premier Moe also extended the provincial state of emergency for another two weeks.

“If anyone is taking the reopen Saskatchewan plan as a signal to relax your personal responsibility to maintain good physical distancing practices, that is a complete misinterpretation of what we have been saying.”

“All restrictions on travel, large gatherings and visiting our long term care facilities and travel to and from northern Saskatchewan remain in effect, said Moe. “All of us must continue to limit our social interactions with people outside of our household.”

Dr. Saqib Shahab, the province’s Chief Medical Health Officer, said the province’s curve remains flat outside of the outbreaks in the north. However, Saskatchewan people need to remain vigilant.

“These are all reminders for us how quickly COVID-19 can come back, even though the curve is flat,” said Shahab. “If you let your guard down as an individual, as a family, as a community, it comes back with a vengeance.”

There were no new recoveries reported on Wednesday.

There are 10 people in hospital, including seven receiving inpatient care and three in the ICU.

There are 38 cases that have been confirmed in healthcare employees.

Saskatoon continues to see the most confirmed cases with 151. There are 75 cases in Regina, 74 in the north, 15 from the south, 11 in the central region and 57 in the far north.

Fifty per cent of people with COVID-19 are men and 50 per cent are women.

To date, 29,106 tests have been performed in Saskatchewan.