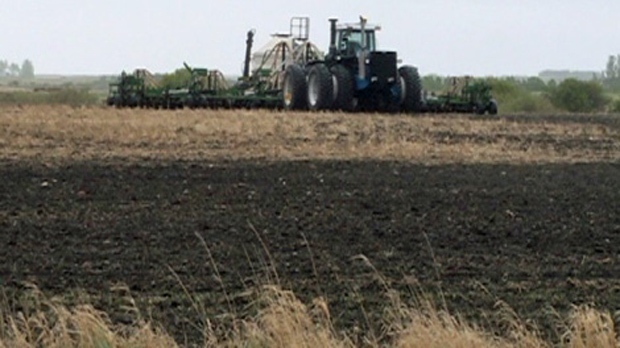 Large amounts of rainfall continue to delay seeding progress for Saskatchewan farmers, particularly in the eastern part of the province, according to the latest crop report for the week of May 10-16.

Agricultural Producers Association of Saskatchewan President Ian Boxall farms near Tisdale Sask. He said May 1 is usually his target date to start seeding but this year, has yet to get any crop in the ground.

“We’re wet. We’ve had some rain over the past couple weeks that has led to seeding delay,” he said. “Guys are maybe starting to panic now.”

The latest report shows 33 per cent of the 2022 crop is in the ground – well behind the five-year average of 53 per cent for this time of year.

“Fifty-nine per cent of lentils, 57 per cent of field peas, 51 per cent of durum, 29 per cent of spring wheat and 27 per cent of barley have been seeded to date. Barley, peas and lentils have begun sprouting throughout the southwest and west central regions.”

A weather system late in the week brought heavy rainfall to parts of the province.

Boxall said he knows there’s farmers in other areas of the province that wish they had the same amount of rain he has had this year.

“After last year’s drought, we’re happy to have the moisture. But at the same token, the weather needs to turn around here so we can get the crop in.”

An emergency resolution before the Assembly of First Nations annual meeting to reaffirm the suspension of National Chief RoseAnne Archibald has failed in Vancouver.

Two young emergency room doctors, raised and trained in Montreal, are leaving their jobs after only two years to move back to Toronto – and they say the Quebec health-care model and Bill 96 are to blame.

The Crown is seeking to revoke bail for Tamara Lich, a leader of the 'Freedom Convoy,' after she appeared alongside a fellow organizer in an alleged breach of her conditions.

The man charged Tuesday with seven counts of murder for opening fire at an Independence Day parade in suburban Chicago legally bought five weapons, including two high-powered rifles, despite authorities being called to his home twice in 2019 for threats of violence and suicide, police said.

Bank of Canada's rapid rate hikes likely to cause a recession, study finds

The Bank of Canada's strategy of rapidly increasing its key interest rate in an effort to tackle skyrocketing inflation will likely trigger a recession, says a new study released Tuesday from the Canadian Centre for Policy Alternatives.

A northern heatwave is melting records in Yukon and Northwest Territories, where temperatures climbed above 30 C in the Arctic Circle.

'We're all really shaken up': Father recounts reuniting with missing daughter as U.S. man is charged

The father of the Edmonton girl who was missing for nine days said he was getting ready to post another update on Facebook last Saturday when police knocked on his door.

The Canadian Armed Forces (CAF) has released further details about what will and won’t be allowed under its revised dress code expected to be enforced starting this fall.