'They have our back': Advancements in technology make for safer firefighting conditions

Over the last three decades, Glenn Wagner has seen how technology can improve safety for firefighters entering a burning building.

Wagner, assistant chief of operations, has been with Regina Fire and Protective Services for 32 years.

Back in the day, equipment and communication were “pretty basic,” he said.

The command unit, of which Wagner is a part of, still uses radio as its main form of communication with the firefighters inside.

However, a laptop inside the command car is the brain behind the operation, allowing Wagner to better communicate with the crews on the ground.

“It gives us a solid two-way communication between our crews,” Wagner said.

“We all carry radios, but if you’re incapacitated or trapped or injured it’s an automatic notification that allows us to communicate back and forth between the firefighters and the command unit.”

One of the biggest advancements has been in personal protective equipment, Wagner said.

Firefighters are covered from head to toe with no exposed skin, which makes it hard for them to know how hot it is inside a burning building.

That’s where heat sensors attached to the air packs come into play.

“It is like a little mini-computer hooked onto the harness that will have an audible alarm, like a screeching noise, that will let you know it’s getting too hot,” Wagner said.

Several different alarms, both audible and visual, are used to alert both firefighters inside a building and the command unit outside, including low-air alarms, man-down alarms and evacuation alerts.

Wagner can monitor all the firefighter’s air supplies from a laptop inside the command car.

Each tank has enough air for about 45 minutes, but firefighters should never let the supply dip below one-third.

In the early days of Wagner’s career, he said there would often be “dead times” with no communication for a short period, and the location or condition of firefighters would be unknown.

“It’s pretty unnerving to think that you’ve got 10 minutes of air left before you run out, and if nobody knows you’re in there, that ten minutes is a short period of time,” he said.

“We can track more now, pretty much minute to minute where everybody is.”

Man-down alarms are triggered when a firefighter is motionless for about 30 seconds, sending an automatic alert to the command unit’s laptop. A firefighter can also manually trigger the alert if they have been injured but are still conscious.

As for evacuation alarms, those are sent from the command unit to the firefighters inside a building. Flashing lights appear in the heads-up display of their masks and an alarm goes off to signal each firefighter to get out of the building immediately.

“We, from the outside, can see something not good, it’s going to turn in a bad direction right away, so we want to alert all our firefighters to evacuate, pull out of the building and we will reevaluate the situation,” Wagner said.

Connor Brown has been a firefighter paramedic for six months. This technology is all he has ever known.

“I feel very comfortable going into any dangerous environment, hot or toxic. We’re fully covered so we can pretty much be ready for any environment,” Brown said.

Fortunately, Brown said he has yet to be evacuated during a call due to a dangerous situation or a low-air tank.

“It’s definitely nice knowing that they’re watching in the car to see how much air we have,” Brown said.

“If there is an event that we need to evacuate for, it’s good to know they have our back.”

Aside from alarms and monitoring systems keeping crews safe, thermal imaging cameras are also stocked in each truck.

The infrared cameras are used in both rescue and overhaul efforts, allowing crews to see through smoke, find victims and locate hotspots. 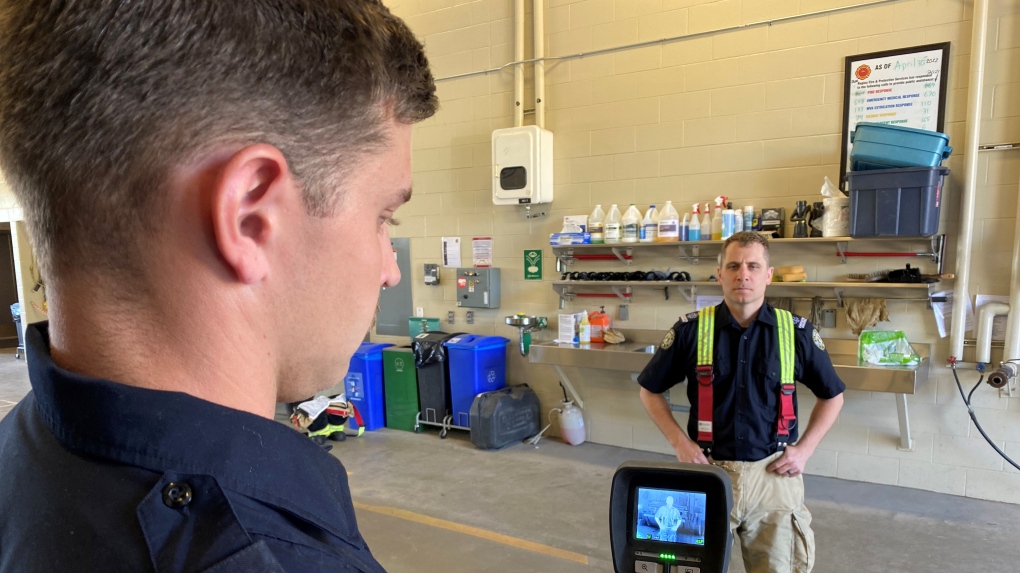 “If there are trapped heat sources in walls or ceilings, it allows us to see through the outer surface of the wall,” Wagner said.

Wagner said these cameras have been around for the last 20 years, but are only now commonly used as the technology catches up and becomes more affordable.

Thermal imaging isn’t the “be-all, end-all,” according to Wagner, but it does make their search efforts more efficient.

Russian missile attacks on residential areas killed at least 21 people early Friday near the Ukrainian port of Odesa, authorities reported, a day after the withdrawal of Moscow's forces from an island in the Black Sea seemed to ease the threat to the city.

A lack of programs to certify lifeguards amid the COVID-19 pandemic is contributing to the industry-wide shortage seen in Canada, a Toronto city official says.