According to RPS, the union acted “in spite of a recent court order which set out the rules of engagement for both sides in the dispute.”

It also said Unifor members who are not a member of Local 594 were told that they could be arrested if they ignored the court order.

Around 9 p.m. on Monday evening, Unifor members allowed some vehicles to be towed that were blocking access to the refinery, including a UHaul they had set up.

Earlier in the day, officers were heard warning Unifor members that they may be arrested for blocking access to and from the refinery for longer than 10 minutes.

During a press conference Dias said the temporary workers were prevented from going to work on Monday, and no trucks have been allowed to enter.

Officers also told @Unifor594 members they may be arrested for not following the injunction. Members started to chant. #yqr pic.twitter.com/GtENIQ6uUV

This development follows an announcement by Unifor which said that the national union was taking over the blockade because a court order ruled that Unifor Local 594 workers could only block trucks for 10 minutes.

On Monday afternoon, Unifor confirmed that its members had blocked a set of train tracks near to the refinery. CP Rail police towed several vehicles off the track.

CP Rail told CTV News it is monitoring the situation.

A tow truck is now here. @Unifor594 members have blocked this entrance into the @CoopRefinery with vehicles. #yqr pic.twitter.com/svGsMhJWcB 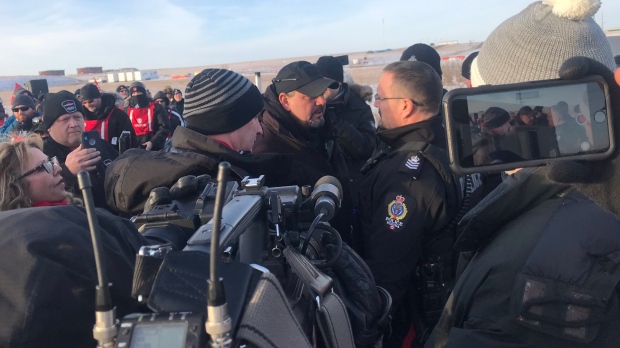