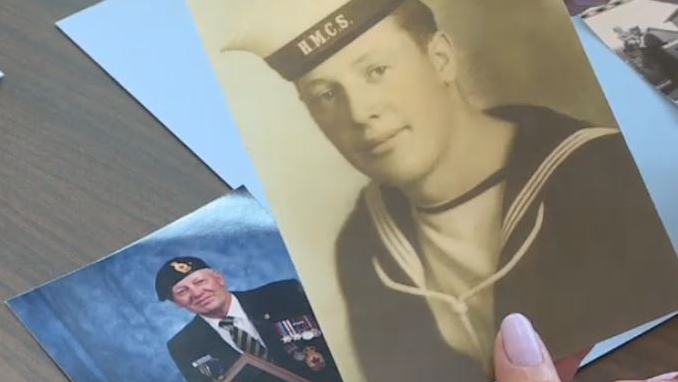 Seventy-five years ago Al Morley, a member of the Canadian Army, parachuted into France on D-Day.

Morley survived the war, but his wife Edith says he, like many veterans, only rarely spoke of his experiences. She knows very little of what he did in the war.

“I should have asked but I don't think he would have told me anyways,” she said.

“I just always felt that if he didn't want to talk about it then I didn't need to know about it,” said Jeff Morley, one of Edith’s and Al’s children.

“We just didn’t really get into the details,” Donna Liebrecht said as she looked though a collection of photos of her father. “Especially when he didn't want to share them."

Both Liebrecht’s father, John Miller, and Al Morley were part of D-Day. Under the codename Operation Overlord, it was the largest amphibious invasion in human history. 14,000 Canadian troops were involved. 4,000 died that day.

Miller was a seaman in the Royal Canadian Navy and helped transport troops to Juno Beach, the Canadian attack sector. Morley was a paratrooper and sniper who was dropped behind enemy lines ahead of the landing craft coming ashore.

Beyond those details, and an occasional location or photo, neither family have many details.

Both Morley and Liebrecht say that growing up without knowing their fathers' actions in the war made it harder to connect the father they knew with the soldiers they were.

"You know that it's a very important thing that happened in the past and he had a role in making sure that everyone had their freedom,” said Liebrecht. “But you really don't—I didn't anyways, think about it.”

The few story that were shared were gruesome.

With fewer Second World War veterans every year there are fewer voices to still tell their stories.

There are efforts to teach students about the sacrifices and keep their stories alive. Earlier in the week the Yorkton Regional High School had two history classes cleaning the tombstones of veterans ahead of the anniversary.

“It’s just kind of running through my mind what they did, what they sacrificed for us,” said Alex Hodgson, a Grade 10 student. “We're here on a school trip and they sacrificed their school for us. It's pretty insane when you think about it."

Instead of focusing on the part of his father’s life that he will never know, Jeff Morley says it's best to remember veterans in the lives they lived after the war.

“I think they all decided to live their lives to the fullest,” he said. “And he did.”