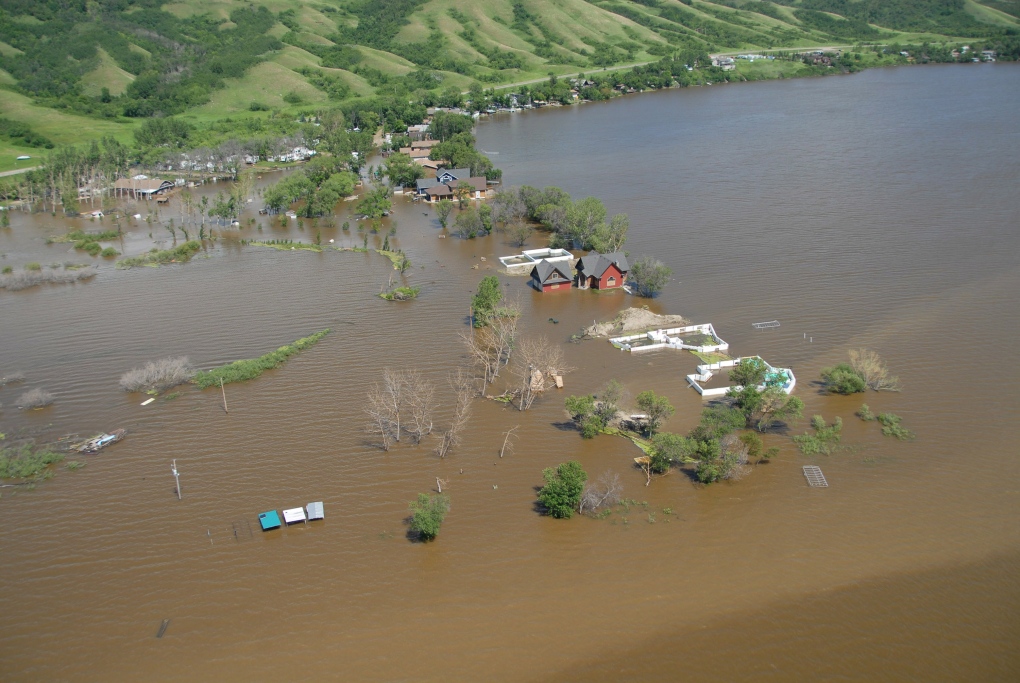 An aerial view of the flooding in the Crooked Lake area of Saskatchewan on Sunday, July 6, 2014 is shown in a handout photo. THE CANADIAN PRESS/HO-Saskatchewan Government Relations

Officials in Saskatchewan say water levels are continuing to decline on all lakes in the Qu’Appelle Valley, with the exception of Last Mountain Lake.

The provincial Water Security Agency says Crooked and Round lakes have both peaked and are expected to drop about one metre over the next two weeks.

Water levels on both lakes are expected to remain higher than normal for much of the summer.

“We’re really looking at and are quite pleased with the forecast going ahead with the warm, dry forecast and are looking to lose some of the lake levels here to evaporation,” the agency's Patrick Boyle said Tuesday.

“The only risk right now is obviously another rainfall or the localized storm systems that could create specific issues, so that’s something we’re watching.”

Meanwhile, the Ministry of Health is advising the public to avoid swimming and other recreational activities in lakes and rivers affected by flooding.

Health officials say samples have shown high levels of harmful E. coli bacteria in the Qu'Appelle lakes and other bodies of water in the flood zone.

Emergency management commissioner Duane McKay said the forecast "is turning in our favour" as the province deals with the aftermath of heavy rain that fell more than week ago. But he also urged people not use some of the lakes in eastern Saskatchewan.

"We still are quite concerned for some of the safety of the people in particular areas that have seen some of the damages," said McKay.

"We'd remind individuals that there is a lot of debris in the lakes, specifically Crooked and Round Lakes, and so we would caution people using the water there that obviously some of the stuff is partly submerged and could create safety hazards for folks."

Seventy-four eastern Saskatchewan communities remain under states of emergency and about 230 people were still out of their homes because of flooding.

Nearly 50 people were also to be moved out of the James Smith First Nation near Melfort on Tuesday because of flooding. More rain over the last few days was cutting off access, said McKay.

"They also have significant water accumulations in particular areas, so water's running into those low areas where the road is, so the ambulances, fire engines, police can't get in and out of those particular areas, which creates a bit of a risk for those that have health issues," he said.