A nearly half-decade-long feud between the Town of White City and the Rural Municipality of Edenwold is now before the Saskatchewan Municipal Board (SMB).

The town has proposed annexation of 3,989 acres of land belonging to the RM to change its community boundary, including Emerald Park. 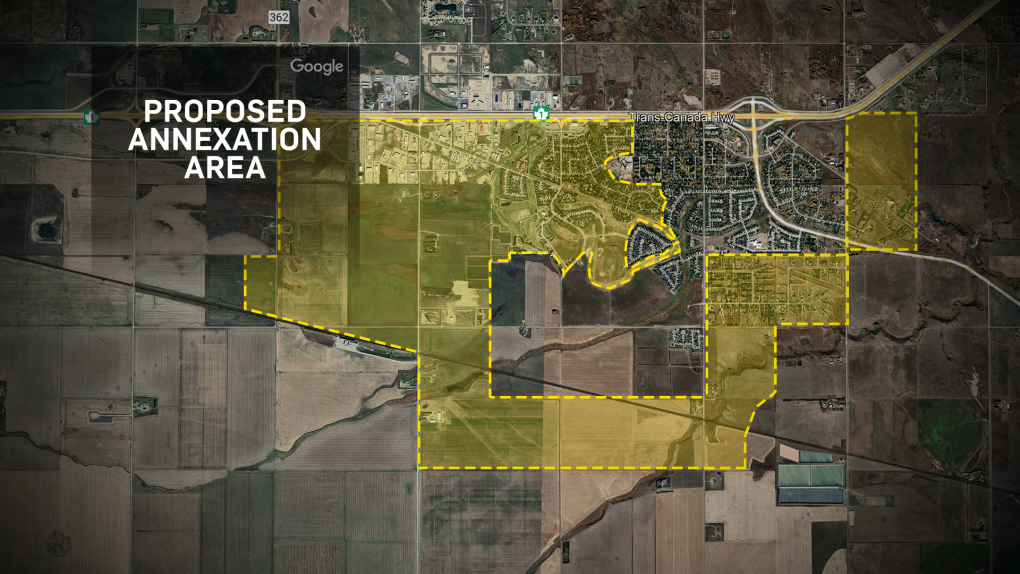 The proposed annexation area is shown.

Edenwold Reeve Mitch Huber said the RM has experienced its own growth as well.

“Growth is fine,” he said. “We don’t mean to impede their growth, but the fact is we’ve seen a lot of development happen. We’re defending ourselves to protect our developed areas.”

Around 5,000 residents live in White City and Emerald Park combined. A population forecast conducted by Metro Economics said the population in the two communities could grow to over 23,000 by 2048.

“People that move there are often young families with young children,” said Tom McCormack, president of Metro Economics. “They are not going to be concerned with whether it is White City or Emerald Park.”

McCormack said growth in either community has been largely impacted by newcomers.

In his testimony to the board, ISL Engineering & Land Services manager of community planning Darren Young said White City has an irregular and disjointed boundary.

“The boundaries are unlike anything I’ve seen in the prairie provinces because of the proximity of the town to the RM,” he said. “You can’t tell where the town ends and where the RM starts.”

According to hearing documents, Associated Engineering said, “White City’s proposal does not align with the town’s land requirement.”

“White City is in dire need of 25 years’ worth of land supply,” he said. “If it doesn’t, the town risks running out of directions to grow.”

“We expect that area to grow over the next several decades,” said Huber. “It’s just about who is better to service those areas.”

The hearing will continue into next week and go on no later than Nov. 30. The board will then release their decision within 60 days of the conclusion of the hearings.

“Regardless of the decision here, I think the residents of both communities will be glad this issue is finally behind us and we can move forward,” said Fergusson.