This is now the third time since April 14 that health officials have only announced one new case.

Saskatchewan has a total of 316 cases. Of those cases, 74 are active. There are also 238 recoveries in the province. 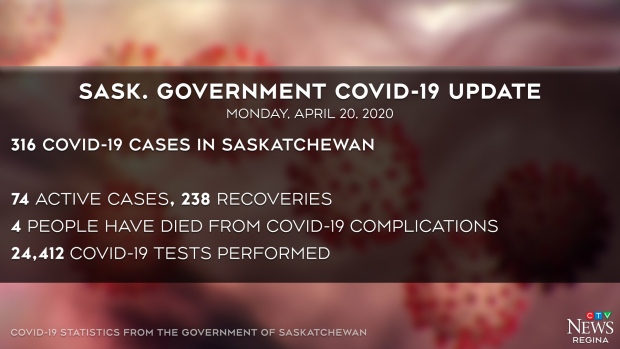 The province says four people are in hospital, including one person in the ICU.

The overall message from Saskatchewan’s Chief Medical Health Officer was positive on Monday.

“Our curve remains low,” Dr. Saqib Shahab said. He said it’s important not to get complacent as time goes on.

Residents are encouraged to continue closely monitoring symptoms, but Shahab said staying home as much as possible is the best way to protect oneself and others, as approximately 30 per cent of carriers show mild symptoms or are asymptomatic.

There are 36 cases linked to travel, 132 from close contacts or mass gatherings, 30 with no known exposure and 20 currently under investigation by public health officials.

The province also says there are 35 cases in health-care workers, although not all workers were infected in the health-care field.

The cases are 52 per cent male and 48 per cent female.

Four people have died from complications relating to COVID-19 so far in Saskatchewan. The last death was recorded on April 10 in Regina.

To date, the province has performed 24,412 COVID-19 tests. Saskatchewan continues to have the second-highest testing rate per capita in the country.