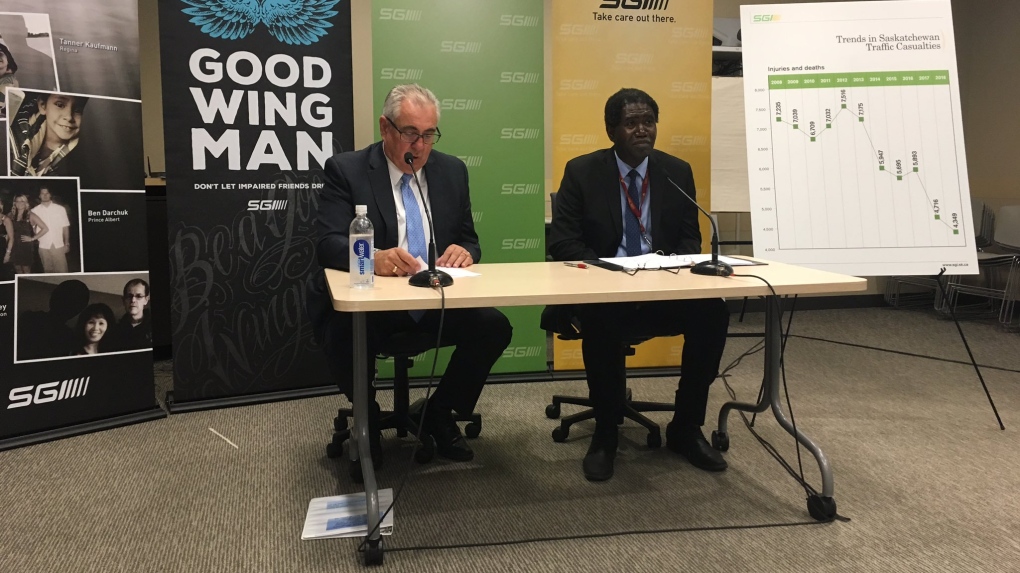 Saskatchewan’s crown insurance company has released its preliminary road injury and fatality numbers from 2018, which show an increase from the previous year.

In total were 129 people killed on Saskatchewan roads and highways last year according to SGI, up from 100 in 2017.

Both statistics do show a drop compared to the ten year average of 6,353 injuries and 142 deaths.

“We’ve done a lot of work over the past ten years,” said Kwei Quaye, SGI’s vice president of traffic safety, driver and support services, speaking to media at a conference Friday morning. “We believe we are on the downward trend faster than the national average is moving, so we believe that in the next few years we’ll hopefully catch up to at least the national average and we’ll be on our way toward being the safest in the country.”

But every injury or death on Saskatchewan roads affects countless people left behind, one of them is Amy Kaufmann.

“Grief is something that no one should have to go through before their time, and it is a really hard road to walk after grief,” Kaufmann told CTV News. “Especially with accidents that could’ve been prevented.”

SGI says it plans to continue its public awareness campaigns against what it calls the “Big Four”, four factors the crown says are the main contributors to fatalities and injuries on the road.

Those factors are distracted driving, impaired driving, speeding and seatbelt use.

The company says although there were fewer casualties across the “Big Four” last year, but nearly every fatal crash still involved at least one of those factors.

Kaufmann says crashes involving those causes are preventable, but in order for them to keep going down, will need more change to what she calls the “social culture” of the province.

Two contributors to the number of deaths were the Humboldt Broncos bus crash, which claimed 16 lives, and a deadly crash near Elrose last June that claimed 6.

Joe Hargrave, the minister responsible for SGI, says even with those two tragedies in mind, even one crash that causes injury or death is one too many.

“We just always have to remember even though our numbers are declining and whatever that it’s family members, it’s you, it’s me, it’s whatever out on the highways getting hurt and getting injured and getting killed,” Hargrave said.

The release of the statistics is timely ahead of the August long weekend, when plenty of drivers will be hitting the road.

“I want to see both the injuries and deaths drop dramatically,” Hargrave said. “I’d love to come back and say there was nobody.”