REGINA -- Saskatchewan has 13 new COVID-19 cases bringing the total above 200, according to the province.

As of April 2, Saskatchewan has 206 confirmed cases and four people in hospital.

Two people are currently in inpatient care in Saskatoon with two people in intensive care; one in Regina and the other in Saskatoon. 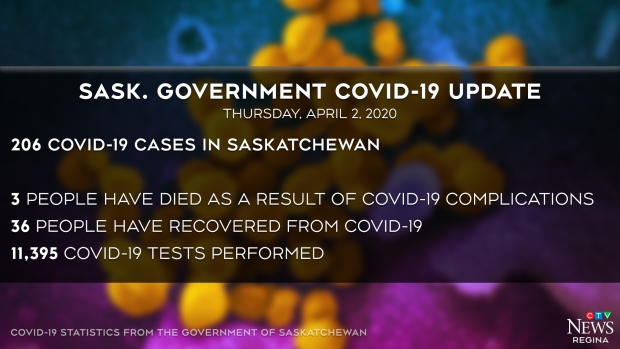 Six more people have recovered from COVID-19 bringing the provincial total to 36.

To date, the Roy Romanow Provincial Laboratory has performed 11,395 COVID-19 tests, including 867 tests in the past 24 hours. It’s the highest number of tests performed in a single day since the virus arrived in the province.

“This is good news, as we work to ramp up our testing and our contact tracing efforts, low numbers of new cases, alongside high numbers of tests, means that our efforts to reduce the spread of COVID-19,” Premier Scott Moe said at the province’s daily update on Thursday.

Saskatchewan has the highest rate of testing per capita in Canada, behind only Alberta.

Moe in conversations with other premiers

Moe has been speaking with other premiers across the country, focusing on the need for PPE for healthcare workers.

“Canada’s premiers remain committed to working together as we fight the spread of COVID-19,” he said.

Premiers from across the country are to meet with Prime Minister Justin Trudeau on Thursday evening.

Moe said he’s focused on working collaboratively with the rest of the country during the pandemic.

Providing models to the public

During the update, Moe said he has asked the Saskatchewan Health Authority to share models about the spread of COVID-19 with the public. Those models are expected to be released early next week.

“The more information we are able to provide to the people of Saskatchewan, the better informed we will all be to fight the spread of COVID-19,” he said.

There are projections and modelling currently being done in Saskatchewan and across the country.

“I expect that what you see will be a pretty wide range of scenarios,” Moe said. “Our healthcare system will plan for larger numbers of patients.”

“We need to keep the numbers as low and as manageable as possible. We owe it to our healthcare workers and to each other.”

The 206 cases include 96 related to travel, 44 with community contacts, 10 with unknown exposure and 56 currently under investigation by local public health.

There are currently no cases at longterm care facilities. Anyone with respiratory symptoms at care homes will be tested, Dr. Saqib Shahab said.

The government of Saskatchewan is reminding people not to have anyone visit your home who do not live there. All public and private gatherings are currently limited to a maximum of 10 people.

“Maintain your physical distance even if you’re outdoors,” Shahab said.

He pointed to passing games and sporting equipment back and forth as a risk for spreading the virus.

“We are at a critical point,” he said. “We appear to be fairly stable, but we need to maintain discipline and maintain low case numbers.”

Shahab provided some information on COVID-19 cases in healthcare workers at Thursday’s update.

He said 11 healthcare providers and family members tested positive for the virus after a curling bonspiel in Edmonton in March.

Shahab also said six other healthcare workers have tested positive for the virus. In at least three of those cases, Shahab said the worker was exposed to a patient with respiratory symptoms and wasn’t able to wear proper PPE.

Shahab added it’s important to tell your healthcare provider about any potential respiratory symptoms to ensure they are able to have appropriate equipment.

Not the time to visit second homes

As weather continues to warm, Shahab and Moe both said now isn’t the time for people to go to the lake or cabin.

“I would urge caution in attending second homes for recreational use,” Moe said. “Moving people around may move this virus around our province.”

Shahab agreed that residents should minimize travel between communities.

“A lot of traffic is probably not recommended,” he said.

“Unless it is absolutely necessary for you to be travelling from one community to another, lay low for the time being,” Moe said.