REGINA -- The province of Saskatchewan is reporting two new cases and 14 recoveries on Monday.

Eight people are in hospital, the province says. No one is currently in the ICU.

The province is reporting 14 more recoveries, for a provincial total of 178 recoveries.

“Nearly 60 per cent of the people who contracted COVID-19 have recovered,” Premier Scott Moe said at the province’s daily update on Monday. “None of this is reason for complacency, but it is a reason for cautious optimism.” 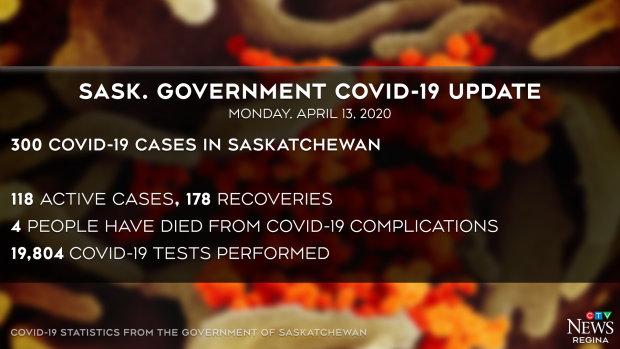 Moe said he is working in close consultation with Chief Medical Health Officer Dr. Saqib Shahab on a plan to “re-open” Saskatchewan.

Barring any major changes in case numbers, Moe said he hopes to be able to release some of that plan next week.

“But, we are only one outbreak away from interrupting those numbers,” he said.

He added life won’t go back to normal overnight. Instead, any restrictions will be lifted in phases.

“We may not be able to move on some areas for a number of months, or until we get a vaccine,” Moe said.

Moe also added that the lower case numbers over the past week are the result of people continuing to follow restrictions laid out by public health officials.

“As we move forward, we are hopeful we can continue to see a flattening of the curve,” he said.

Moe and Shahab both emphasized the need for testing and contact tracing when lifting restrictions.

The province has new machines deployed in Meadow Lake and Prince Albert that can confirm COVID-19 cases in several hours. Around a dozen other communities should expect machines in the coming weeks.

Moe also said the province is receiving more tests from the federal government.

Saskatchewan has the second-highest test rate per capita in the country.

“We really need that testing capacity to be at 1,500 (per day) or even beyond that in the weeks after we open the economy,” Moe said.

He added testing and contact tracing can help locate and isolate any flair ups.

“The whole goal is to identify any outbreaks as they occur and contain that exposure,” Moe said. “If we are going to relax some of the restrictions in our economy, then we have a comprehensive and robust testing and contact tracing plan in place.”

Thirty-three cases are in health-care workers, but the province says not all cases are the result of working in the health-care field.

Shahab said at least 11 of the cases were the result of a curling bonspiel in Alberta.

“Transmission doesn’t seem to happen when proper PPE is used,” Shahab said. “But, it does happen without proper PPE or in institutions where PPE may not be required.”

The Athabasca Health Authority screening protocols for health-care workers in the northern part of the province are the same as those in the south.

No outbreaks in long-term care facilities

There are still no outbreaks in Saskatchewan’s long-term care facilities.

On Monday, the province announced new protocols to continue to protect staff and residents at these facilities. The protocols include regular temperature checks for employees, masks and minimizing staff movement between facilities.

There are also visitation restrictions at SHA-run facilities in the province.

Of the 300 cases, 131 are travel-related, 120 are from close contacts or large gatherings, 27 have no known exposure and 22 are currently being investigated by public health officials.

As of April 13, the Roy Romanow Provincial Laboratory has performed 19,804 COVID-19 tests.