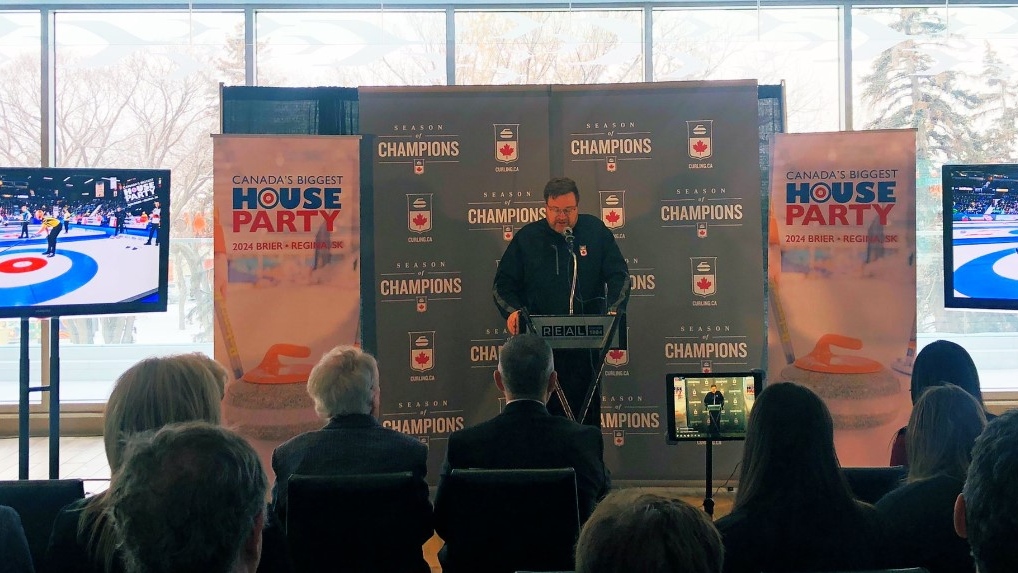 Curling Canada announced Tuesday that the 2024 Brier will be played in Regina. (BritDort/CTVNews)

The 2024 Brier will be coming to the Brandt Centre in Regina.

“Curling and Saskatchewan go hand in hand,” Katherine Henderson, Chief Executive Officer of Curling Canada, said in a release. “With Regina’s rich curling history and its passionate and dedicated curling community, we’re thrilled to be bringing our marquis men’s championship back to Regina.”

“The Brier returns to the province that has the most diehard and loyal curling fans, as well as the most dedicated and hardworking volunteers,” Minister of Tourism Jeremy Harrison said.

Jim Wilson, a member of Saskatchewan’s last rink to win a Brier Championship and current President of CURLSASK, was on hand for the announcement Tuesday.

“No matter where you’re playing it’s just great to win in your province. First of all, curling is our official sport in Saskatchewan. I could walk around the street, walking my dog when the Brier’s on or the Scotties and I can look in every window and there’s curling on TV,” Wilson said.

We're thrilled to announce that the 2024 Brier will be held in Regina at the Brandt Centre. Details in our story: https://t.co/aLruV06j3n#Brier2024 pic.twitter.com/WAEllWhGId

“The 2018 Brier was a great success and every event Regina has put on has been a huge success,” Curling Canada’s director of Communications Al Cameron said. “That’s you know obviously [because of] great fans, great volunteers, great facilities and great hotels.”

“[To come back within] six years is not unheard of and they put in a great bid. Regina put in the best possible bid, so it was an easy decision from our standpoint,” Cameron said.

“Coming out of COVID we wanted to host sporting events in Regina. Guys on the leadership team for the 2022 Grey Cup, [we said] we need to keep this going for Tourism Regina and Tourism Saskatchewan,” Chair of Curl Regina’s Bid Committee for 2024 Brier, Bernadette McIntyre said. “They [also] realize what the economic impact is. It’s probably conservatively between 10 and 12 million dollars but as you heard from Curling Canada [when Lethbridge hosted] it was 16 million.”

“I think we’ll enhance this fabulous facility, it’s nice it’s all connected [International Trade Centre and Brandt Centre]. We will have all kinds of things for fans to do in between the curling and the Brier Patch,” McIntyre said on what improvements and additions they will look to make from 2018.

The winner of the 2024 Brier will represent Canada a month later at the World Men’s Curling Championship from March 30 to April 7 in Schaffhausen, Switzerland.

Ticket and volunteer information will be released in early 2023. Fans are encouraged to sign up on the Curling Canada Collective to receive updates.