REGINA -- The province of Saskatchewan announced 34 new cases of COVID-19 on Monday.

There are 29 new cases in the far north, four in the north and one in Saskatoon.

The province says Monday’s total includes local presumptive cases from May 2. Those cases hadn’t yet been reported in the province’s total cases. 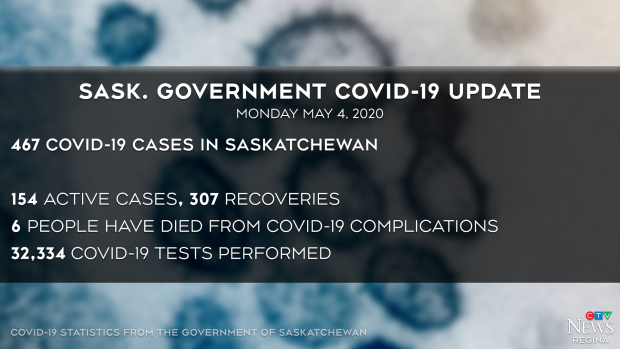 Two more people have recovered, bringing the province’s total to 307.

Most active cases in the far north

The far north has the most active cases at 97, accounting for more than 60 per cent of the province’s active cases. The north region has 35 active cases. 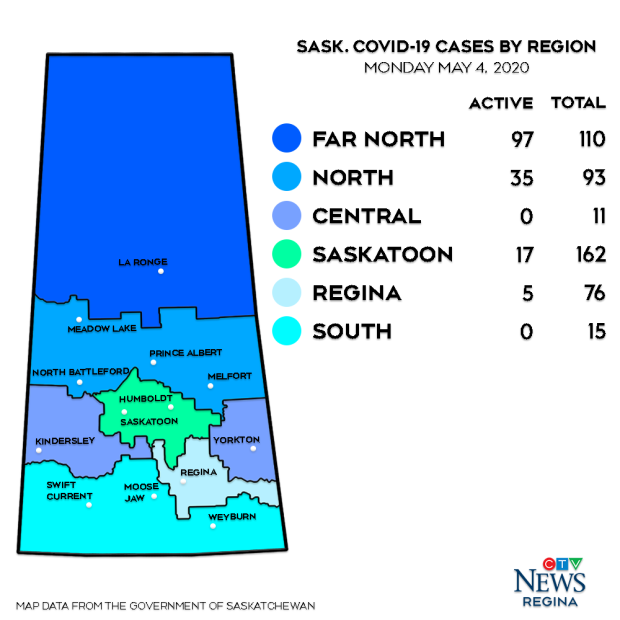 “While that number is very concerning, it means that increased testing in that area is working,” Premier Scott Moe said at the province’s daily update.

Moe said the province is focused on aggressive testing and contact tracing in the province’s north. There are also temporary living spaces in place for people who need to self-isolate.

The premier said the outbreaks show the importance of maintaining proper physical distancing.

“This virus can and will spread quickly if we let our guard down even for a moment,” he said.

The Saskatchewan Health Authority provided an update on some of the outbreaks in the province on Monday, but said the numbers can change constantly.

Lloydminster Hospital is cohorting COVID-19 patients and sending people who haven’t tested positive to other facilities.

Moe added the province is working closely with northern leaders to help handle the outbreak in northern Saskatchewan.

“We’ve been working very closely with communities to ensure we’re supporting them, to do what we can to stem the spread of this virus,” he said.

First phase of reopening the economy

The first phase of Saskatchewan’s plan to reopen the province began on Monday.

Moe said he is “quite confident” in the plan moving ahead.

“The vast number of communities across this province are pretty quiet when it comes to infections, so we should be moving forward with our reopen Saskatchewan plan,” he said.

Phase one is delayed in Lloydminster and La Loche as they manage outbreaks in the area.

“It will continue on pause in La Loche for some period of time as we have an isolated outbreak in that part of the province,” Moe said.

The plan also has information on parks and campgrounds, boat launches and fishing. Camping reservations opened on Monday for June camping dates.

Golf courses can open on May 15 under specific guidelines.

The public health order remains in place that caps gatherings at 10 people. Residents should also maintain two metres of physical distance between themselves and people who don’t live in their household.

“As Saskatchewan opens in a methodical fashion, all these measures that we have been practicing so well as part of our routine now, we need to maintain that,” Shahab said.

Shahab said the province will be watching closely for any unexplained outbreaks.

“If our overall numbers across the province start creeping up and there’s no identified exposure, that would be something that would be a cause of concern,” he said.

Moe said Saskatchewan has laid out a methodical plan that’s slower than other economies in the country.

“That is why we left a number of weeks between phase one and phase two, and no date for phase three,” he said.

Dates will change if there are non-localized outbreaks.

“We won’t eradicate COVID-19 in Saskatchewan until we have a vaccine,” Moe said. “The goal is to minimize the spread of this virus.”

Moe also said the SHA will release a plan to start elective procedures on Tuesday.

The province says 138 cases are from travel, 182 are from community contacts including mass gatherings, 40 have no known exposures and 107 are currently under investigation.

Saskatchewan is reporting a total of 43 cases in health-care workers, but said they may not have been infected on the job.

For the first time, the province is reporting more infections in women than men. The cases are 49 per cent male and 51 per cent female.

Anyone who is feeling even mild symptoms is encouraged to reach out to health officials for testing.