REGINA -- The province of Saskatchewan is reporting eight new cases of COVID-19 on Tuesday, bringing the province's total to 184.

Seven more people have also recovered from the virus, with a total of 21 recovered cases in Saskatchewan. 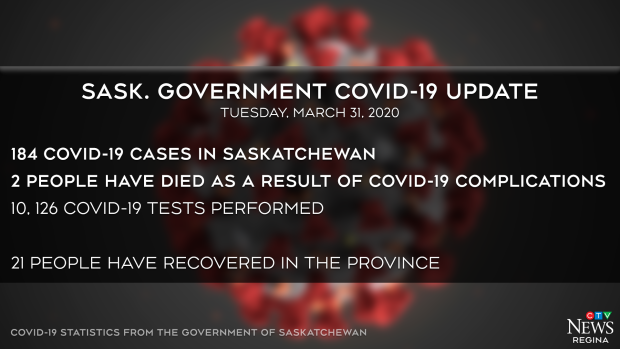 Four people are in hospital, the province said in a news release. Three people are in acute care in Saskatoon and one is in the ICU in Regina.

While the increase on Tuesday is much lower than the numbers reported over the past couple of days, the province says it's important for people to continue to follow guidelines for self-isolation and physical distancing during the pandemic.

"[Tuesday's] number of new cases may be the lowest in a week, but it’s important not to get complacent with precautions for COVID-19," health officials said in a news release. "It’s as important as ever to stay home whenever possible, and to avoid close contact (a minimum of two metres) with others to prevent spreading the virus."

People who have tested positive for COVID-19, travellers returning from outside of the country or people who have been exposed to another person with COVID-19 are required to self-isolate for 14 days by law.

A total of nine cases are the result of community transmission. The rest are related to travel or other mass gatherings.

The cases are 55 per cent male and 45 per cent female, according to the Ministry of Health.

There have been 10,216 tests performed in Saskatchewan, as of Tuesday. The province says it has the second-highest rate of testing per capita in the country.