Football fans from across Canada are gathering in Regina this week for the Grey Cup game, which will take place on Sunday. For some however, it’s about much more than just football.

One large group, made up of fans from every CFL city, meet up annually at the Grey Cup.

It all started on Twitter, where they’ve been connected for years.

“Social media is how we really got to know each other. Over the years we go to games and we meet up. It’s worked out great.”

For some, the friendship started back in 2010. Smaller groups will meet up throughout the CFL season for games in different cities, but every Grey Cup is where they all come together. It doesn’t matter which teams are playing.

“We had hotels booked probably in the spring, not knowing who was in it. We were always going to come. No matter who’s playing what team, we will be here,” Liz Audet, a Calgary Stampeders fan, said. 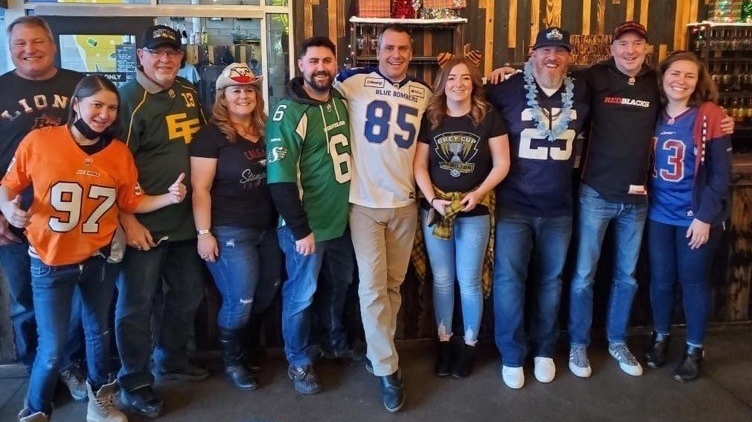 A group of fans from across Canada has become close friends through Twitter and their love of the CFL and now meet at the Grey Cup every year. (Photo courtesy: Laura Stewart)

This year, they all reconnected again on Thursday evening at the Grey Cup Festival.

“Historically, the Spirit of Edmonton is the kickoff and everybody comes so you get to see everybody” Janice Owen, a Saskatchewan Roughriders fan, said.

It’s the first year back to a regular Grey Cup Festival since before the pandemic, so the meet-up means a little more.

“It’s a breath of fresh air. It’s great to see friends again,” Agar said. “It’s a league like no other. The fan base is what makes this league.”

Since their friendships go back years, the group has been there to support each other through various stages of life.

“Seeing them and getting to talk about daily life beyond football, like ‘how are your kids? How is your family? How is work? How is your life?’ is really great,” Audet said, highlighting how she met another member of the group when she was only 11-years-old. 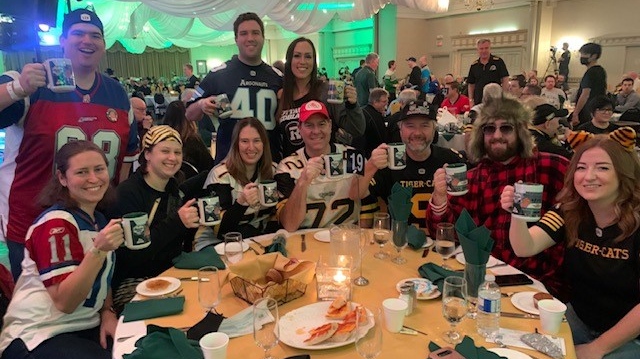 Even without football seasons during the pandemic, they all stayed connected on special occasions - including New Year’s Eve.

“We couldn’t gather with our family or friends but we gathered with our CFL family over Zoom,” Laura Stewart, a Hamilton Tiger-Cats fan, said. “We’ve rang in the last two years together so it’s been special.”

There is no doubt they all have their differences when it comes to what’s happening on the field, but the relationships away from the field are what keep the connection going.

“[I know people] wherever I go across Canada. I was in Hamilton this year and I had a place to stay, I had tickets and I had family to go and party with and enjoy the game and cheer with. I affectionately call them my frenemies on game day,” Owen said.

At every Grey Cup Festival, the CFL typically hosts a “Tweet Up” - a place where people who connect on Twitter can meet up in person.

Because the friendship is ever-growing, this specific group is hosting its own gathering this year with 130 people whom they’ve connected with online expected to join.