'A hallmark of the community': University of Regina officially reopens Darke Hall

'A hallmark of the community': University of Regina officially reopens Darke Hall

The University of Regina officially reopened Darke Hall on Thursday. Originally built in 1929, Darke Hall was a beacon of the arts in the city which hosted theatre productions, music theatres and festivals as well as convocations and graduations.

Prestigious Saskatchewan people including Tommy Douglas and W.O. Mitchell have been honoured on the stage of the hall.

Dr. Lyn Goldman started working for the university when it was still a part of the University of Saskatchewan. She grew up and performed in Darke Hall numerous times – including starring as Cinderella at 10-years old.

Dr. Goldman was one of the numerous donors for the project.

“I know this building intimately,” she said. “A city without a theatre and a college is a back water. The Methodists who built the Regina college knew this, and so did Frank Darke.”

The bones of the original building still exist. The project aimed to preserve the history of Darke Hall while updating amenities to make the venue more vibrant, modern, inclusive and accessible.

Electrical and building codes were brought up to date. The original dressing rooms gave more lighting and was made top-tier for performers and musicians. A staircase was added which mirrors the original on the other side.

Seats for patrons grew to 21 inches from 17. Although there are about 200 fewer seats, not one gives a bad view of the expanded stage. 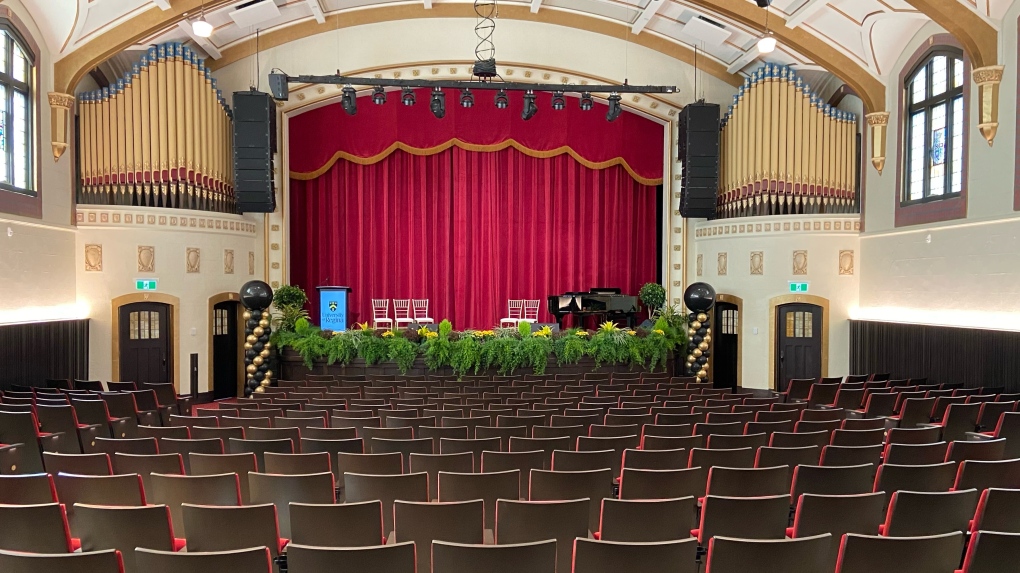 It was made complete with the addition of a common area and foyer which connects the campus to the Conexus Credit Union head office.

The university hopes to return the hall to its former glory and make it the staple in the community it once was.

“As I look around, I see the pipes, the stained-glass windows, the ceiling. I look at what once was the glory of Darke Hall and I see that once again coming through,” said University of Regina president and vice-chancellor Jeff Keshen. “

“It’s bringing life back to what had been a real hallmark of the community.”

The restoration was a part of the University of Regina’s College Avenue campus renewal project which began in 2016. It was not until 2019 when the plans for Darke Hall were finally revealed and put to action.

According to the University of Regina, the entire cost of the renewal project sits around $84.5 million. The college building is $64 million of that while the Darke Hall restoration makes up $18.5 million.

“It was very important to the university and to our office to recognize the historical significance [of Darke Hall] to bring it back to life,” said lead architect for the restoration, James Youck. “Anything we’ve inserted into the building to modernize it, has a very light-modern touch.”

While the University of Regina will be the owners of the hall, a group has been formed to run the day-to-day operations. Philanthropist Ann Phillips and former C.E.O. & artistic director of the Regina Globe Theatre, Ruth Smillie will be known as the founding members of the Darke Hall Society.

If an election were to be held today, the Conservative Party would win more seats than the Liberals, potentially enabling Pierre Poilievre to become Prime Minister, the latest seat projections from Nanos Research show.

On the heels of another tense hearing with Hockey Canada's past and current board chairs defending the organization, Prime Minister Justin Trudeau and MPs were unequivocal on Wednesday in their condemnation of Hockey Canada's resistance to making changes that they say are necessary.

The federal government is asking a judge to dismiss a proposed class-action lawsuit brought forward by a group of Black public servants, who allege discriminatory practices within the public service.

Starting Thursday, businesses in Canada will soon be able to pass credit card fees on to their customers, thanks to a multimillion-dollar class-action settlement involving Visa and Mastercard.

Tom Mulcair: An election that affects us all

François Legault may have changed his separatist strategy but he hasn’t changed his stripes, former NDP leader Tom Mulcair says in an exclusive column on CTVNews.ca.

It's been six months since a Canadian airline crew was detained in the Dominican Republic after finding drugs on board and reporting them to the authorities.

A school board east of Toronto is apologizing after a four-year-old student walked home alone during lunchtime earlier this week.

State of emergency declared in northern N.S., thousands still without power on P.E.I.

More than 16,000 customers in Nova Scotia and Prince Edward Island are still without electricity 12 days after post-tropical storm Fiona hit the Maritimes on Sept. 23. The ongoing outages and restoration efforts have prompted the Nova Scotia government to declare a state of emergency in several counties in northern Nova Scotia.

A U.S. court has sentenced a Canadian man to 20 years in prison for his role in a number of cyberattacks involving the ransomware NetWalker.