REGINA -- There are four new presumptive positive cases of COVID-19 in Saskatchewan, according to an update on the province's coronavirus website on Thursday.

Eight cases are confirmed and 12 are presumptive at this time. 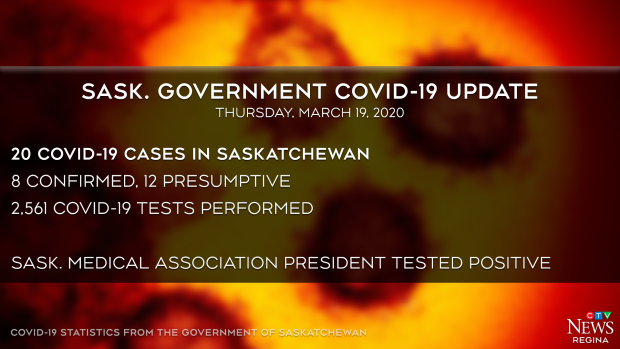 Three of the four new presumptive cases are related to travel, and one is a close contact of a known case.

Dr. Saqib Shahab confirmed that one new case is Dr. Allan Woo, the president of the Saskatchewan Medical Association. Woo believes he contracted the virus at a curling bonspiel in Edmonton.

Shahab said health officials are investigating who else Woo may have contacted at the bonspiel.

"Did certain people sit together as a group and mix more than others?" Shahab said. "Based on that, determination will be made shortly, in a day or two. That does involve all persons who attended."

As of Thursday, 2,561 tests had been performed.

Shahab expects that most businesses will comply with orders to either close or limit the number of patrons. He said there could be fines and other penalties for those that don’t comply.

On Wednesday, the province declared a state of emergency after announcing eight cases of the novel coronavirus.

CTV News Regina's Marc Smith is live at the update: