ZAGIME ANISHINABEK -- First Nations communities in Southern Saskatchewan are working together to restore the buffalo populations that were nearly decimated a century ago.

Five years ago, a herd of 22 buffalo were gifted to the Peepeekisis Cree Nation by the Loko Koa, a group of Christian Samoan volunteers from the Balcarres area.

Lima Nanai, the director of Loko Koa, said he wanted to return the sacred animal back to the indigenous people to restore hope and cultural identity.

"It means more to them,” said Nanai, “I was just lucky to have my friends come alongside and we're able to do this for the Indigenous community.”

The herd originated from Ron Steckly, a rancher from Carstairs, Alberta, who partnered with Loko Koa to donate the 22 buffalo to Peepeekisis.

"I knew in my heart that that project I was going to be a part of. There was never any doubt, this is always yes this is what I’m going to do," said Steckly.

Six bulls have been used to feed the community for feasts, powwows and weddings. Many parts of the buffalo have also been used in ceremony.

Five years later, the herd is now more than 90 buffalo strong, so it is time for the First Nation to donate part of the herd to another first nation.

200 years ago, nearly 70 million buffalo roamed North America, but by the turn of the 20th century, the prairie symbol was nearly wiped out.

Peepeekisis decided to donate part of its herd to Zagime Anishinabek, and the community made sure they did not miss the buffalo returning to their lands for the first time in two centuries. 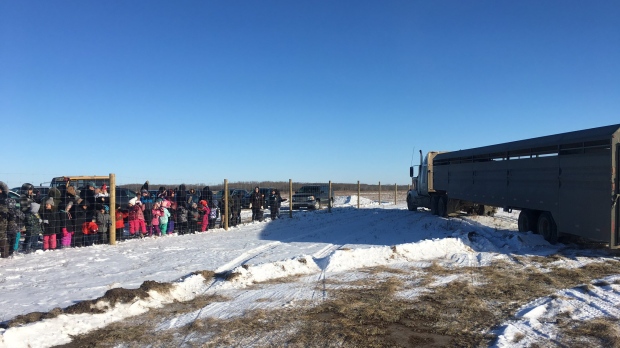 “We're once again reconnecting with the spirit of the buffalo and we're welcoming this medicine to the land," said Lynn Acoose, the Chief of Zagime Anishinabek.

In another five years, Zagime will donate buffalo to another First Nation, carrying on the tradition. They say herds will continue to be passed along until the buffalo have returned across North America.