Regina Exhibition Association Limited (REAL) is exploring what a brand new 10,000 seat event centre could look like in the city.

REAL is scheduled to present possible plans for a Regina entertainment district to the city’s executive committee on Wednesday.

It suggests the city should use the future replacement of the Brandt Centre as a catalyst to create a new mid-sized multi-purpose event centre.

The feasibility study lays out five viable locations for the project, including the REAL District, the rail yards off Dewdney Avenue or three properties in downtown Regina. 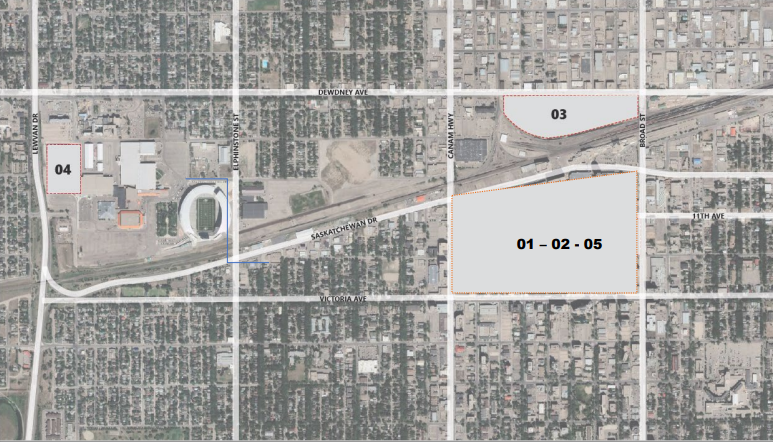 REAL is recommending one specific location in downtown Regina, which remained confidential, that it feels is best suited to support the project.

“It is the unanimous decision of the Arena Planning Strategic Committee (APSC2) that the downtown location #5 outlined in detail within the final report holds the greatest potential for the creation of an entertainment district and maximizing the transformational change and financial benefit for the greater City of Regina,” the report read.

REAL anticipates between $100 million to $120 million in construction costs for the project, with an additional cost of $32.7 million to $33.1 million for land assembly costs.

The plans for use of the new facility factor in the addition of National Lacrosse League (NLL) and Canadian Elite Basketball League (CEBL) teams in Regina.

The report estimates the new facilities would be in use around 100 days annually, between the Regina Pats, an NLL and CEBL team; as well as concerts and events.

The operational model projects $1.8 million in net operating income annually, with $10.4 million in revenue and $8.5 million in operating costs.

The APSC2 is composed of several stakeholders in Regina, including the Warehouse District, the Downtown Business Association and the Regina and District Chamber of Commerce.

The study also recommends the Brandt Centre be repurposed either as a space for recreational or agricultural use.

REAL is optimistic the report will be accepted by the city and used for future planning of a possible replacement of the Brandt Centre.

Salman Rushdie remained hospitalized Saturday after suffering serious injuries in a stabbing attack as praise poured in for him from the West but he was disparaged in Iran.

Ukraine's health minister has accused Russian authorities of committing a crime against humanity by blocking access to affordable medicines in areas its forces have occupied since invading the country 5 1/2 months ago.