New Saskatchewan NDP Leader Carla Beck is looking to the people of the province to help form some of the party’s next policies, as it enters a new chapter facing a significant Saskatchewan Party majority.

Beck gave some insight into possible platform policies following her victory, but said many issues will be determined out on the road as the party embarks on a tour of Saskatchewan communities.

Here are the main ideas Beck shared during her speeches at the NDP convention and interviews after the leadership vote.

One of the priorities Beck mentioned several times was outreach to meet with more people and get the party's own messaging out.

“Everyone right across this province has a place and has an important role in our party,” she said.

The NDP is looking to widen its appeal among voters ahead of the next provincial election, with the Saskatchewan Party currently holding 48 of a possible 61 seats in the legislature.

“The only way we could win the next election is by meeting with people where they’re at, bringing them in, building trust and working together to find those solutions that we all seek,” she said.

Saskatoon Meewasin, Ryan Meili’s former constituency, will be the next battleground for the two parties, with a yet to be scheduled by-election coming up. A loss in Saskatoon Meewasin would drop the NDP to 11 seats.

Both Meili and Beck emphasized the need for the party to unite in order to close the gap on the Saskatchewan Party, at the leadership convention on Sunday. Beck also spoke about the need to heal divisions across the province as a whole.

“The environment versus jobs, urban versus rural, social justice versus security, neighbour versus neighbour. But friends we’ll never get ahead that way, not as a party and not as a province,” Beck said.

While the new leader said the party will do some things differently under her leadership, she emphasized that change won’t be coming in the form of a rebrand.

“Any rebranding can’t just be about changing colours and changing font, it has to be about fundamentally changing how we go about things, telling our own story,” she said.

Two tangible changes she mentioned include speaking with individuals and groups that the party may have had a harder time reaching recently, and an “all of the above” jobs policy. 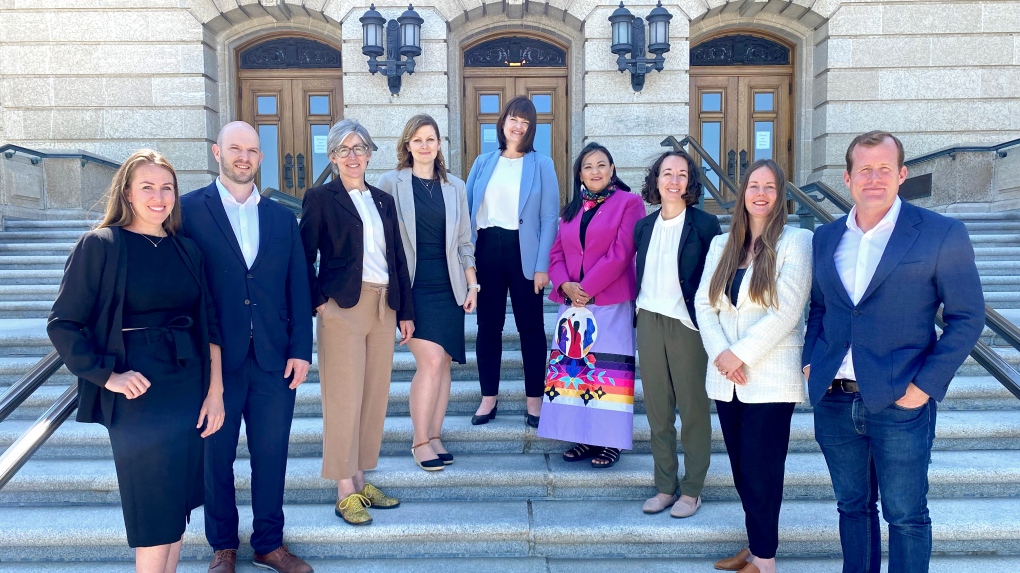 Saskatchewan NDP Leader Carla Beck stands with members of the party caucus on the steps of the Saskatchewan Legislative Building. (Gareth Dillistone/CTV News)

THE ENVIRONMENT AND JOBS

While climate change was a key topic at the NDP convention, Beck is hoping to be able to balance environmental policy with a plan for Saskatchewan jobs.

“Climate change is real and we have to find solutions for right now. There’s no plan on offer that anyone has any faith in,” she said.

She said she hopes to be able to work with experts within both the natural resources and renewables industries to find solutions to reduce emissions.

Beck also maintained that the Saskatchewan NDP is in support of all federally approved pipeline projects.

“I do agree with the premier here: Saskatchewan has what the world needs. We need to take advantage of that and build solutions that actually benefit the people of Saskatchewan,” she said.

With the goal of advocating for Saskatchewan at the national level, Beck said she would work with any federal leader that could help benefit the province.

She identified a fair deal for equalization, supply chain and rail line stability for Saskatchewan resources; airport connections and rural connectivity as issues an NDP government would look to address with the federal government.

“Making sure that our resources in this province, that there’s an understanding by eastern parties, eastern leaders, that the way the economy works in Saskatchewan is different than it works in British Columbia, or Ontario or Quebec, and that our needs, the needs of this province be recognized,” she said.

“But also what we can contribute to this country needs to be recognized as well.”

Beck said she understands the frustrations of Saskatchewan people with eastern Canadian politicians, but noted it is important that the province remains at the table to find solutions with the federal government – no matter who is in power.

“There is a real need for us to be at those tables ensuring that the voices and the needs of Saskatchewan people are represented there,” Beck said.

The Saskatchewan Legislative Assembly resumes in the fall, where Beck will take on her first session as leader of the party.