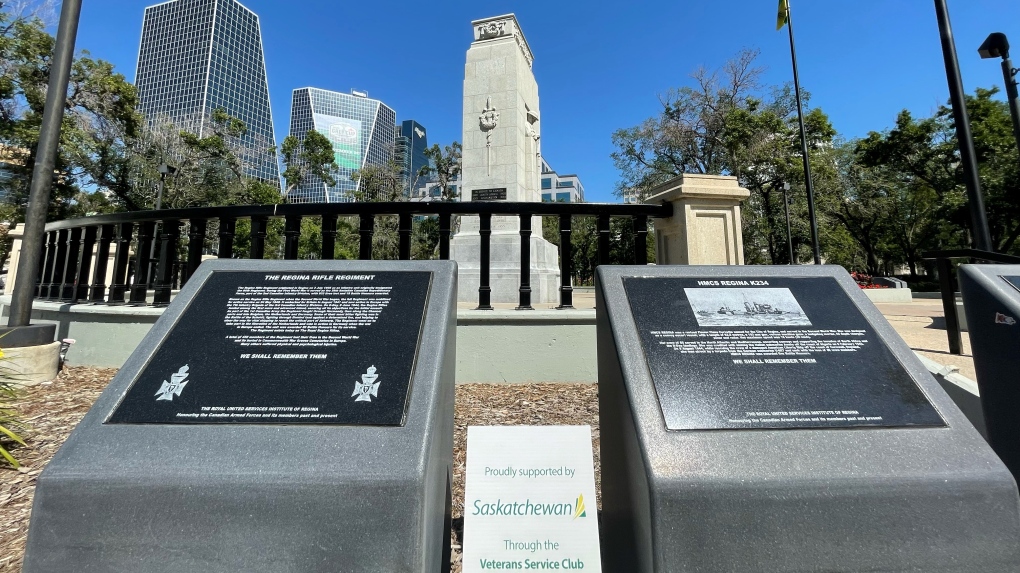 Commemorative pedestals for the HMCS Regina and the Regina Rifle Regiment were unveiled at the Cenotaph in Victoria Park on Aug. 8, 2022. (Katy Syrota/CTV News)

Victoria Park in Regina’s downtown was host to an unveiling ceremony for two commemorative pedestals around the Cenotaph on Monday.

One of the pedestals was dedicated to the HMCS Regina, a Flower-class corvette which took part in escort duties during the Battle of the Atlantic during the Second World War. The HMCS was sunk by a German U-Boat on Aug. 8, 1944.

The other pedestal unveiled was in honour of the Regina Rifle Regiment, an infantry unit that served in northwest Europe during 1944-45. The regiment has been Regina’s infantry regiment for 117 years.

The pedestals are now part of a collection of nine commemorative memorials at the cenotaph, each dedicated to a piece of Saskatchewan’s military history.

“Canadians know that remembrance is about saluting those who fell in Canada’s service, but we’re not sure they actually know the circumstance of what they’re supposed to be remembering,” Brad Hrycyna, president of the Royal United Services Institute of Regina, said in a news release.

“These pedestals are going to be a tool that will help them to understand the sacrifices that servicemen and women have made for our country.”

Pedestals dedicated to the HMCS Weyburn, the South Saskatchewan Regiment as well the British Commonwealth Air Training Plan are set to be officially unveiled on Aug. 19 and Sept. 15.

After a night of delays, the vote counts came hard and fast, resulting in Danielle Smith being named the UCP’s new leader and Alberta's next premier.

An attacker with a large kitchen knife killed two people and wounded six others in stabbings along the Las Vegas Strip before being arrested Thursday, police said.

The number of recorded storm-related deaths has risen to at least 101 in the eight days since Hurricane Ian made landfall in southwest Florida.

Myles Sanderson was responsible for all 11 deaths during the mass stabbing in Saskatchewan last month, according to RCMP.

Poilievre condemned for use of YouTube tag targeting 'misogynistic' groups

Prime Minister Justin Trudeau and the Liberals are accusing Pierre Poilievre of 'using his videos to appeal to far-right misogynistic online movements,' following a report that Poilievre's YouTube channel was using a hidden tag to promote his videos among anti-women audiences.

Hunters who use a brand of climbing sticks intended to help them scale trees should stop immediately, Health Canada reports in a consumer product recall alert.

Judy Tenuta, a brash standup who cheekily styled herself as the "Goddess of Love" and toured with George Carlin as she built her career in the 1980s golden age of comedy, died Thursday. She was 72.