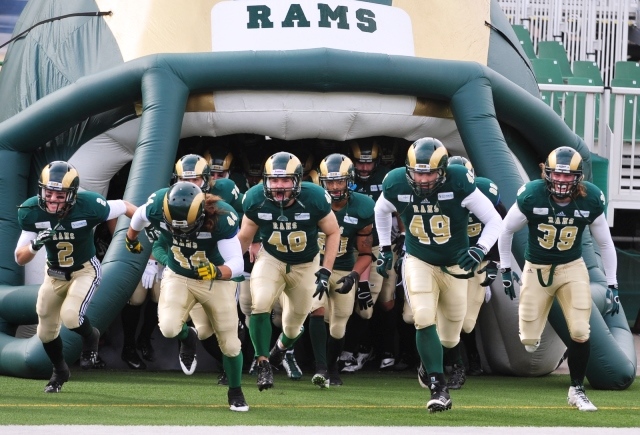 The University of Regina Rams held off a late game surge from the visiting University of Calgary Dinos on Friday night at Mosaic Stadium to secure a 32-24 victory.

It’s the Rams’ second straight win in this year’s Canada West football season. The Rams are now ranked seventh in the nation in the USports football power rankings.

The Rams started the game strong, building up a 15-6 lead at the half thanks to a five yard touchdown run by Winnipeg Blue Bombers prospect Kyle Borsa and a pair of Aldo Galvan field goals. Galvan would connect for five field goals on the night.

The Rams built on their lead in the third quarter. Canada West player of the week Anthony Bennett scored on a 28-yard pick six.

First year Rams quarterback Noah Pelletier then gave fans the highlight of the night. The rookie hit a streaking D’Sean Mimbs for a 64-yard major to extend the league to 32-9.

Calgary began mounting a comeback late in the game. Dinos quarterback Daniel Sananes connected with Matt Sibley for a touchdown that brought the visitors to within eight with just over a minute to play. The Rams defence were able to end the threat with a Jaxon Ford interception.

“I’m so proud of our players,” Rams head coach Mark McConkey said in a release.

“I don’t feel we’ve come close to playing to our potential just yet. We’ll continue to learn and improve each week.”

The Rams are back in action on Saturday, Sept. 17 when they host the University of Saskatchewan Huskies at Mosaic Stadium. It’s the first game in the newly launched Prairie Challenge series between the two schools.