A beautification project on the main street of Coronach has allowed artist Stephanie Bellefleur to showcase the beauty of southern Saskatchewan while mentoring 15-year-old Amanda, who wants to pursue art.

“I created this mural based on a lot of the elements that are tied to the community,” she said. “Anywhere from agriculture and a lot of the shifts and the energetic change that is happening for the town of Coronach.”

Bellefleur is a contemporary visual artist who combines fine art elements with street art culture. She’s most known for painting murals and community-engaged artwork. The mural in Coronach is centered around a colorful deer and various plants found in the area such as Saskatoon berries, lentils as well flax. 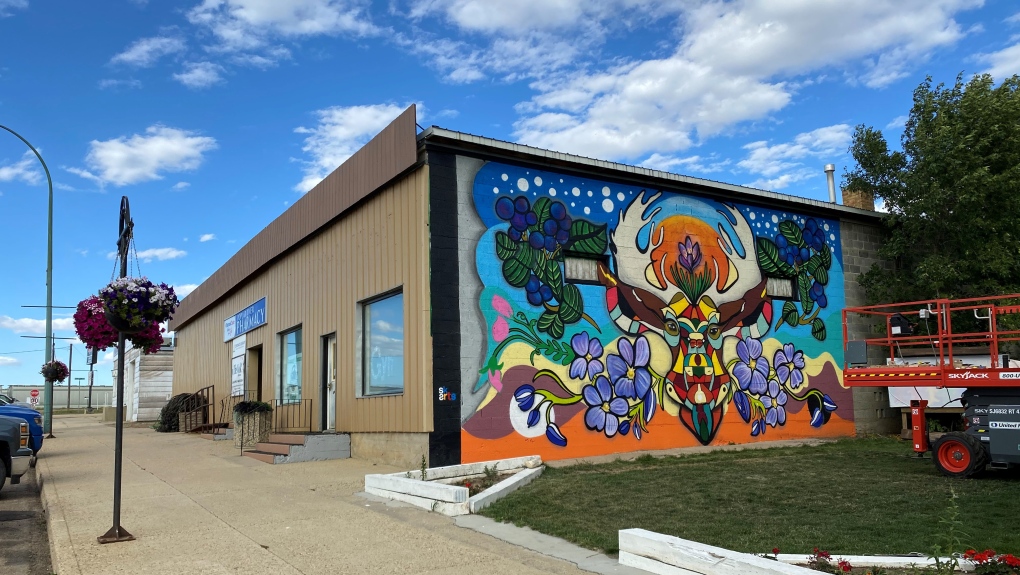 The project allowed Bellefleur to host art workshops for kids in the community as well as mentor Amanda to complete the mural.

“Mentorship in my business,” she said. “In my work…my journey is always important because not only am I teaching someone but I’m always learning.”

Amanda has liked the experience she’s gained and she’s eager to do more.

“I want to help out more with murals and stuff and hopefully my art gets a lot better,” she said.

Bellefleur, who has Indigenous ancestry from Venezuela, grew up in Saskatchewan and believes its essential for artists like herself to lend a hand to aspiring Indigenous artists like Amanda.

“Working with Amanda, was all in alignment,” she said. “It really worked out well, she was a wonderful student. I’m hoping that in the future to access more funding in order to help give her paid opportunities and help her as a young person to continue develop her career.”

Amanda’s Indigenous roots come from the Haida Gwaii, an Indigenous group off the coast of British Columbia. Although she does not know much about them, she says the artistic experience with Bellefleur has interested her in learning more about her culture.

“I’d maybe like to travel around like the Haida,” she explained. “And learn more things about different places and maybe some of their spiritual animals and their designs so I can see what the spiritual animals represent.”

Bellefleur understands Amanda’s journey of self-discovery, as she is on the same path; using art to understand her ancestry after so much of it was erased.

“Indigenous people here are reclaiming a lot of their roots,” she said. “There are parallels there for a lot of South American people.”

She explained that being an artist is a deeply personal affair, requiring a lot of introspection.

“Because with my own discovery of myself, I am still learning a lot of those things,” she said. “Through the process of learning through art. Through having to identify and figure out, ‘where are my roots? Where am I from? Who am I?’ Asking those deeper questions, it’s helped me get closer and closer.”

Overall, Amanda has liked the experience and the time she’s spent with Bellefleur.

“It’s been super fun learning about things that Stephanie’s done before and where she’s from,” she said.

Now that the mural is complete, Bellefleur is planning to stay in touch with Amanda. Helping her begin both her artistic journey and her journey of self-discovery.

“…My hopes are to be able to guide Amanda towards the accurate and the more specific people that can teach her within her lineage,” she said. “So that in her own journey, she can use that art as a catalyst to build on her spirituality and her growth as a young person.”